The Life Cycle of Eels

Eels are born and grow in salt water, but live their adult lives in freshwater. Find out all about them here. 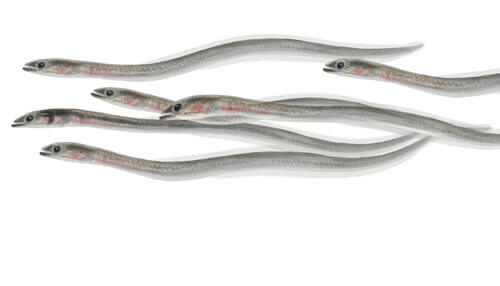 Eels have become a popular addition to some dishes, as many types of Asian cuisine have become more and more prevalent worldwide. However, this animal has remained mysterious to many people. Today, we’re going to tell you all about the life cycle of eels.

The physical aspects of eels

What we usually consider an eel is actually what is called an “elver.” This is an eel that is not fully developed and still in the early stages of its life cycle. Although they are constantly growing, eels that are usually used for commercial reasons are small and light, measuring about two inches.

Similar to fully grown eels, elvers are characterized by an elongated and smooth body. They don’t have scales. Initially, the young are transparent. However, they change color as they grow, based on their environment.

Yellow eels, for example, are transparent when they are young. Then, they develop a brown color on their back as they grow. This eventually changes to green in their adult phase, and, finally, they turn silver in their most mature phase.

However, you might be wondering about the eels you see in stores. Commercialized eels are white, grayish or slightly black. This is because they are generally precooked, rather than sold live. This preserves them better and prevents them from decomposing.

The life cycle of eels

Eels belong to the order of anguilliform, which includes several teleost or ray-finned fish, such as eels, moray eels, and conger eels. All eel species make up a single suborder called Anguilloidei. River eels, mud eels, and spaghetti eels all belong to this suborder.

The common European eels (Anguilla anguilla), as well as all river eels, are a species of euryhaline fish. This means that the life cycle of eels takes place partly in salt water and partly in freshwater.

That’s why most eels migrate to rivers after they develop in salt water. Shortly after their birth, the elvers begin their first migration to river beds. This is when the most important metamorphosis in the species takes place and they become eels.

Reproduction and sex determination of eels

One of the most curious facts of about eels is that they are all females during the first phases of their life cycles. Because of this, it’s impossible to find a male elver.

When they reach sexual maturity, some eels can change sex to ensure that the species can reproduce. Experts believe that the salinity of the water plays a fundamental role in determining the sex of eels. This is because only females migrate to rivers to spawn.

About a year after experiencing metamorphosis, as spring arrives, eels migrate to freshwater to reproduce. The migration marks the beginning of sexual maturity and the end of the life cycle of eels.

As this migration occurs, you can observe male and female eels. However, males remain in more saline waters during almost all of their life cycle.

Interestingly, experts haven’t been able to get high-quality images or videos that show how eels reproduce. That’s why this continues to be a mystery in these peculiar fish.

Finally, we want to note that eels are omnivorous. However, their diet mostly consists of worms, insects, mollusks, crustaceans, and small fish.