Farmers, ranchers, and veterinarians often have to deal with the devastating effects of pests. One of the biggest discoveries in recent years has been the effectiveness of using predatory insects as biological pest control. 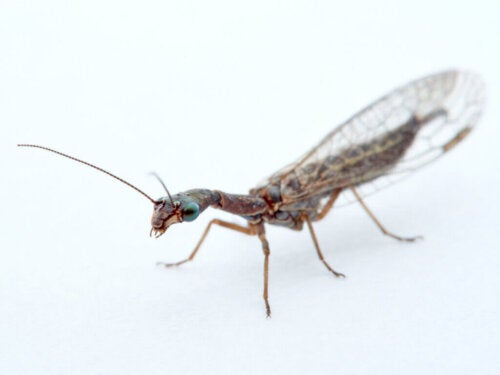 Raphidioptera and Chrysoptera are insects used for biological pest control. People have used them for years in economic entomology and vector control work.

Pest control is a fundamental part of the professional activity of biologists, veterinarians, and entomologists. Decades ago they exclusively resorted to chemical control and the use of synthetic insecticides. Their negative effects on health and the environment manifested soon enough, and so researchers began to seek alternative methods.

One of these is pest control via the introduction of predatory living beings into their environment. Continue reading to find out more about this intricate process.

We’re about to introduce you to Raphidioptera and Chrysoptera, some interesting insects that humans use as natural pest controllers.

Raphidioptera is commonly known as snakefly due to the similarity of their necks – an extension of their thorax – with this animal. They’re an order of holo-metallic insects, with transparent wings furrowed by marked vein patterns.

Their larvae live under the bark of conifers, eucalyptus, and certain fruit trees, where they devour many insects that are harmful to ecosystems. The adults are also predators and active during the day.

Chrysopods have several common names that refer to:

These insects are cosmopolitan and prefer green areas and their larvae predate other soft-bodied arthropods. Some adults are only active at night, unlike the Raphidioptera.

This is the main predating genus and the green lacewings are the most common in Europe. Their eyes are golden with metallic reflections but all colors fade as soon as the insect dies. Another example is the giant lacewing, whose wingspan can reach five centimeters. This bug prefers streams or road sewers.

People commonly refer to both the giant and the green lacewing as “stink flies.” This is due to the strong odor they give off, the same that protects them from birds and other predators.

Both groups of invertebrates are pest controllers and here’s why.

Economic or Applied Entomology studies insects of interest to human beings, either by the products they provide or the impact they have on human goods. The following bugs are of particular interest for these kinds of studies:

Some Raphidioptera and Chrysopids have been used for pest control programs because they’re mostly generalist predators. This has been possible due to the implementation of integrated pest control using, among other techniques, biological control by means of predators.

Thus, biological control is an agricultural method of pest control that uses living organisms that are in some way competitive with the organism that needs to be eradicated.

The mechanism of Raphidioptera and Chrysoptera

What humans do is produce and release a massive amount of these insects into the natural environment, especially in agricultural production areas infested by pests. They’ve successfully controlled mites, butterflies, wasps, ants, and aphids, among others.

Larvae and adult predators feed on these other arthropods by injecting them with a digestive juice that liquefies their body and allows them to absorb it.

The main challenge of this massive production of predatory insects is the control of cannibalism during the larval stages. This requires the use of special substrates, concrete design of the facilities, and timely releases.

The usefulness of pest control insects

Finally, these and other insects, as well as insectivorous birds and other animals, have demonstrated numerous advantages in controlling pests. They mainly help avoid the negative consequences of the accumulation of insecticides in the natural environment. In addition, they prevent the appearance of these substances in food and water supplies.

Production exercises of any of these species can also be a method of economic and labor diversification in rural areas where there are pests. This contributes to rural development, environmental protection, and, above all, the maintenance of biodiversity.

Animal-Plant Pollination is an Ancestral Symbiosis
Pollen is rather unpleasant yet crucial to many species who perpetuate ecosystems by continuing the ancestral symbiosis of pollination. Read more »
Link copied!
Interesting Articles
Invertebrates
Discover How Worms Reproduce