Lightning bugs are found all over the world, and are instantly recognizable by their bioluminescent glow. 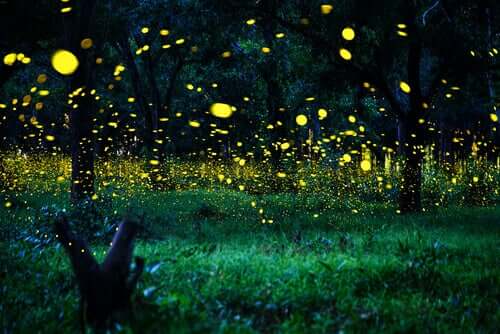 Lightning bugs (or fireflies) are creatures that have fascinated humans for thousands of years. Despite there being several different species of fireflies, each can be recognized by its characteristic luminescent abdomen. Classified as invertebrates, each species has its own distinct light pattern, which they use as part of their mating rituals. In this article, we’ll learn about these incredible bugs in more detail.

Lightning bugs are a type of beetle, of the order Coleoptera, and are closely related to ladybugs. There are almost 2000 different species of fireflies, living in temperate regions all around the world.

There are a number of key differences between males and females, which is why it’s impossible to generalize when it comes to describing their size and shape.

Male lightning bugs grow into fully developed insects, complete with wings and a large body, a similar shape to that of many other beetles. Females never reach this stage of development, as they stop developing shortly after they stop being larvae.

Females are much smaller and, in many species, they don’t grow wings. They’re easy to confuse with several other species of insects that live in foliage and the trunks of trees.

The key characteristic that sets lightning bugs apart from other insects is the brightness of their abdomens. This is known as bioluminescence, and is a feature common to all fireflies.

This glowing abdomen has a number of different uses. It’s mainly used as part of mating rituals, and to scare off potential predators. In other words, it’s a defense mechanism similar to that seen in frogs and other brightly colored animals. It’s designed to tell predators that they’re not appetizing, and may even be poisonous.

Biologists know how lightning bugs produce this light, but not how they’re able to control it so that it shines intermittently. They’re known to have an organ that is dedicated solely to creating light. When they take in oxygen, it mixes with other substances to produce luciferin, which reacts to generate light.

Lightning bugs are nocturnal insects that live all around the world, except in colder regions such as the North and South poles, and countries near the Arctic circle. In fact, they have a preference for temperate climates and humid environments.

That’s why it’s common to see them in swamps and forest regions. However, they can also live on the banks of rivers or areas where there’s plenty of water, similar to butterflies.

As for their reproductive process, females lay eggs that hatch in the form of larvae. They tend to hide and feed in dark, humid environments, such as underground tunnels or rotting tree trunks.

So, the best places to see lightning bugs in the wild are forests, woodland, and areas with water in temperate countries. The greater the humidity and the higher the temperature, the more likely you are to find fireflies. The water can be stagnant (as in swamps and ponds) or running (such as rivers and streams).

However, over the past few years, scientists have discovered that it’s becoming increasingly difficult to see lightning bugs. Although they don’t know the cause of their disappearance for certain, experts suspect that it may be due to a number of different reasons.

Deforestation and humans encroaching on their natural habitat could be contributing to the fall in numbers. However, chemical waste being dumped into aquifers may be another cause. These are the same factors that experts suspect are endangering bees.

Fireflies primarily feed during their larval stage. The female deposits her eggs somewhere dark and humid, where they incubate for three or four days. After that, the larvae hatch. They feed on worms and snails, which they catch using a special fluid, which allows them to paralyze and slowly digest their prey.

A few weeks later, the larvae become adults. In some species, adult lightning bugs don’t actually feed at all. It seems that the life expectancy of fireflies is so short that they’re able to ingest enough energy while they’re larvae to live out the rest of their adult lives. Other species, however, can feed on pollen and nectar.

Lightning bugs are one of the best known of all the insects. The destruction of their habitat is causing their numbers to fall sharply, regardless of how important they are for the environment. Fortunately, some countries have begun to recognize their importance within the ecosystem, and have even created firefly sanctuaries to help stabilize their numbers.

The Giant Swallowtail: The Biggest and Most Exotic Butterfly
The giant swallowtail or Papilio cresphontes is an amazing butterfly. It looks very exotic and is found in large numbers across North and South America. Read more »
Link copied!
Interesting Articles
Invertebrates
The Cricket: Is It a Pest or Good Luck?