The Weta: One of the Largest Insects in the World

The weta is one of New Zealand's native species, and one of the largest insects in the world. 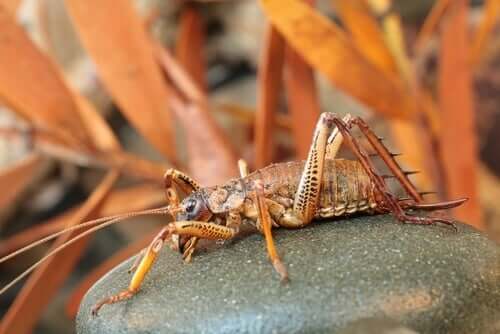 In this article, we shall be taking a trip to New Zealand to discover one of the world’s largest insects. While it might look like it could have hopped straight out of a sci-fi film, the weta can be found in many areas across New Zealand, and its impressive size makes it rather difficult to miss. So today, we want to tell you more about one of New Zealand’s most iconic animals.

What is the weta?

If you stick to the official definition, you’ll find that the term weta is actually used to describe around 70 different members of two distinct families of insect: Anostostomatidae and Rhaphidophoridae.

As with many of New Zealand’s native animals, the name weta comes from the Maori language. Studies of fossils have meant that scientists have been able to trace these insects back as far as the Triassic period, around 190 million years ago.

Of all the insects in the world, the weta is one of the largest. Giant weta (Deinacrida fallai) have been known to reach up to 8 inches in length. As for their appearance, the weta looks almost like a grasshopper or cricket, which are, in fact, close relations.

Some characteristics common to all weta include an inability to fly – partly due to their weight – and their nocturnal habits. During the day, they prefer to remain hidden. But when night falls, they take the opportunity to find food. Their diet varies from species to species: some are omnivores, while others feed on vegetable matter such as fruit, leaves and seeds.

If their unusual appearance wasn’t surprising enough, the way these insects adapt to temperature extremes is even more impressive. When the cold winter months arrive, the weta survives thanks to a mechanism known as cryptobiosis.

This tactic involves the temporary suspension of all bodily functions, allowing the animal to survive almost indefinitely. In cold conditions, cryptobiosis prevents the water from freezing in their cells, helping the insect survive the winter. This extraordinary ability has also been noted in other insect species, as well as in bacteria and plants.

The first species we want to tell you about is the giant weta. In fact, this term encompasses 11 different species, which belong to the genus Deinacrida. These monstrous insects can weigh up to 1 oz, although some people have reported specimen weighing up to 2.5 oz. They’re commonly found living at higher altitudes on South Island, as well as on some of the smaller outlying islands.

The tree weta is another of the most distinctive and best-known species. Belonging to the genus Hemideina, these insects usually live in holes in trees, living in groups made up of one male and several females. They are characterized by their large mandibles, which they won’t hesitate to use if they feel threatened. Today, there are 7 recognized species of tree weta.

Finally, we want to look at the tusked weta. As the name suggests, this species has large tusks which project forward from the male’s mandibles. When the males fight, they use their tusks to fight off their opponent. These insects are mainly carnivorous, living on a diet of worms and other insects. Like tree weta, they also live in holes in trees.

The Deadliest Insects in The World
Insects are the most varied and abundant animals on the entire planet Earth. And some of their species are lethal to humans and other animals. Read more »
Link copied!
Interesting Articles
Invertebrates
Pathogens and Diseases: Can a Fly Be a Disease Carrier?