Insect bites aren't just annoying - they can sometimes be fatal! Whenever you decide to travel to an exotic location, make sure that you're aware of the dangers first. 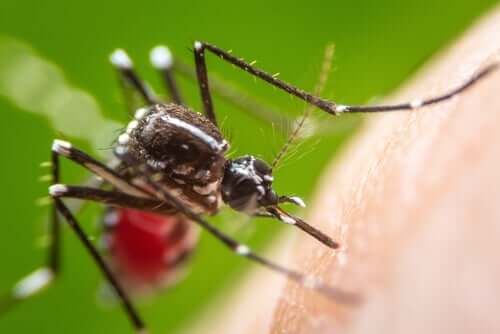 Mosquito bites are annoying and leave a reddish mark that can get infected if you scratch it. But, did you know that these insects can transmit certain diseases? In this article, we’ll tell you all about the diseases transmitted by mosquitos.

Mosquitos are small, blood-sucking insects belonging to the order Diptera. They have a proboscis which they use to feed off the blood of other animals.

Mosquitos live in all environments and ecosystems, and they develop in four stages: egg, larva, pupa, and adult.

To complete this cycle they need water. This is why it’s not a good idea to leave containers that collect liquids in your house. That way, you can avoid mosquitos around the home, particularly because they can transmit the following diseases:

Dengue is a disease caused by the Aedes Aegypti mosquito. Its symptoms are similar to those of the flu but it can worsen and become fatal.

This infection is very common in tropical areas and in urban areas, although it can’t be passed from person to person. It’s transmitted by mosquitos when they bite an infected person and then bite a healthy person.

The virus lasts between 4 and 10 days in the human body but stays in the female mosquito for their entire life. They tend to bite during daylight hours and then lay their eggs in the water.

This disease is one of the most widespread in Africa and mainly affects children. It’s transmitted by the Anopheles mosquito and the first symptoms appear 10 days after the bite. The main symptoms are yellowing of the eyes and skin, fever, and chills.

Direct transmission between people can only happen via the placenta (from mother to fetus) or by blood –  a transfusion from someone who has caught the virus. Prevention is the best way to avoid malaria. Travelers should use mosquito nets, wear clothing that covers most of the skin, and constantly apply insecticides.

Chikungunya is transmitted by two types of mosquitos, the Aedes Aegypti and Aedes Albopictus. During the first stage of the disease, the patient suffers from a high fever. They then go on to develop severe joint pain, which can persist for several weeks.

There’s no specific treatment to reduce symptoms, although doctors recommend rest and plenty of fluids. Prevention is the best way to avoid infection, although, once a person catches the virus, the body generates antibodies to cope with it and becomes immune for the rest of their life.

This is one of the “newest” mosquito-borne diseases and it’s carried by the Aedes species. Although anybody can catch it, it’s particularly serious for pregnant women. This is because there have been cases of babies born with microcephaly after their mothers caught the virus.

Zika is more common in tropical regions, such as Brazil and French Polynesia, and it’s difficult to diagnose. It doesn’t present any specific or acute symptoms. Once again, prevention is the key to preventing it from spreading.

This virus is originally from Africa and causes encephalitis. The West Nile virus is more common in birds (it has a high mortality rate), although it also can affect horses and people.

There’s no evidence suggesting that a human being can become infected by being in contact with an infected bird, whether alive or dead. However, what we do know is that the Culex pipiens mosquito transmits the virus to various species through its bites.

Health Alert: Diseases Transmitted by Ticks
In this article, we're going to talk about the diseases transmitted by ticks. Keep reading to learn how to keep your pets and family safe from them! Read more »
Link copied!
Interesting Articles
Invertebrates
Waggle Dance: The Dance of the Bees