How Spider Webs Are Made

Some spiders create sticky webs so that their victims struggle to break free. 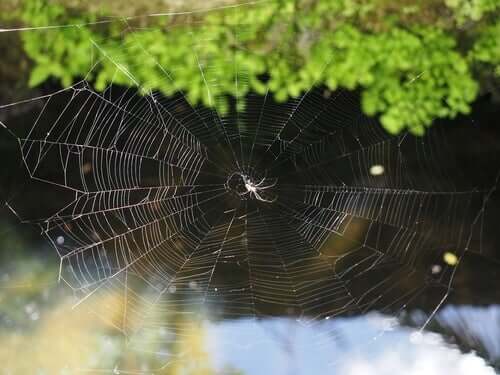 Spiders are famous for several reasons, including the fact that they weave their webs, which they use as a hunting tool. Want to know how spider webs are made? Then read on!

Spider webs are great for making beautiful art, but they have a much more important job: catching prey. This is why they’re so strong.

They’re a death trap that most insects can’t escape from. As soon as a spider feels movement on the web, it comes out of its hiding place to attack its victim.

How spider webs are made: techniques

So, how do spiders make their webs? First of all, they put a lot of effort into building them.

Spiders have glands at the back of their abdomens, so their bodies are prepared for this. However, they need a lot of time to recover.

Making a web starts with synthesizing proteins from a liquid silk, which solidifies when in contact with air. Depending on their needs and the environment they live in, spiders choose the thickness or type of silk to build their webs from.

It all depends on what prey they want to catch, what the climate is like, what size the spider is, etc. Some species create sticky webs so that victims find it hard to get away; others build their webs so smoothly that insects are trapped by their own anatomy.

Some spiders weave their webs between two trees, and allow the wind to “carry them”. When the thread leaves their bodies, they use the wind to move and design the web.

They start by making a bridge, which they then use as a reference point. From there, they continue to build their web so that they can mark their territory and make the most of the space available.

They start from a base, adding more and more detail, thus making the web strong and resilient.

The initial pattern is known as ‘radical’, and it must be the most elaborate to support the entire web. The remaining lines in the surrounding area are known as ‘orbs’.

While working, or after finishing their web, spiders use it to hang upside down and rest. Sometimes to move themselves from one side to the other.

Interestingly, most spiders are visually impaired, so they use their legs to guide them when building the web.

Without a doubt, a spider’s web is one of the most beautiful and striking creations to come out of nature. The thread made by spiders is stronger than a steel cable of the same thickness, and is five times more elastic. Even us humans haven’t yet been able to create a similar material.

There are different types of spider webs. Some look like a “maze”, others more like a “funnel.” But the most famous is the classic “web” shape that we all recognize.  No matter what, they’re all designed to catch prey that can’t escape.

Spiders don’t follow any particular shape or design, but make their webs based on their needs. They can also reinforce or improve it if they fail to catch insects with their design. Meaning, they may need to make the lines closer together or stronger depending on the weight of the prey.

Therefore, the spider’s task isn’t complete once it has finished its work. They will probably have to make a new web after eating, if it has rained heavily or because of strong winds.

Finally, we have to mention the black widow, one of the most feared spiders and unfailing hunter in the world, thanks to its webs. They create a “curtain” type web that has very sticky threads that hang vertically. Many insects fail to escape. As soon as they come into contact with the web, the spider will jump on top of them to swallow them.

Another spider worth mentioning is the gladiator spider. This spider transports the fabric between its legs until the moment it locates its prey. Then they throw down a net, similar to Roman soldiers.

Manure Kings: The Strange Dung Beetle
The animal we'll be talking about today is widely known around the world: The dung beetle. There are many facts about this insect you'll find interesting. Read more »
Link copied!
Interesting Articles
Invertebrates
Cockroaches: 6 Types and Characteristics