Wheat Weevils: A Plague in Your Pantry

Wheat weevils belong to the Curculionoidae family. This family of herbivorous beetles has some members that are responsible for crop pests, and they're quite dangerous to agriculture. 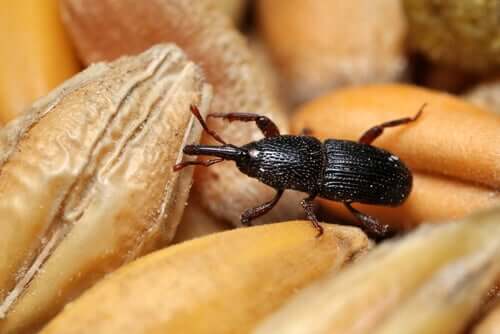 Wheat weevils are beetles of the Curculionidae family. However, there are a few subgroups within this group. The subgroup we’re about to discuss here today belongs to the genus Sitophilus.

Wheat weevils are a subgroup that belongs to the order Coleoptera and, as we said above, the Curculionidae family. All specimens of the three species have a size that varies between 5/64 and 5/32 inches.

Their elongated snout is an interesting characteristic of this group who easily adapt to any size of grain. The three species of this subgroup are blackish-brown in hue, although each one of them has specific individual characteristics.

Infestations take place both in the importation of grains or cereals, as in the cultivation of the field itself. Even in the storehouses that house the crops, or in the transport vehicles themselves. Depending on the species, you can find them in specific locations.

The way they propagate is as follows. The females lay a single egg inside a single grain and seal it with a mucilaginous secretion. Then, the larval phase and the pupa period take place within that grain. Afterward, when the wheat weevil is fully developed, it crawls outside.

For the weevil to leave the interior of the grain, they have to make a large hole. This hole is one of the signs that confirms their presence in the grain.

This beetle has a bright dark brown hue; almost black. This hue is lighter than that of the other two species. They also lack spots on their body.

Even though their body is elongated and cylindrical, it doesn’t exceed 5/32 inches, nor is less than 5/64 inches. Another characteristic of this species is they’re wingless, in contrast to the rest of their close relatives.

So, the wheat weevil doesn’t fly and yet infestations still take place, both in the importation of grains and cereals, and within the storage areas or transport vehicles themselves. This bug doesn’t eat the grain that’s planted in the field.

The reproduction conditions of the wheat weevil are very specific. They require a temperature between 55 and 95 ºF. Another condition is for the grain moisture content to be at least 9.5%.

Habitat and distribution of wheat weevils

Researchers observed that both adult and young specimens can resist climates with low temperatures. However, not all species in this subgroup can tolerate colder ones.

Consequences of the plague

Wheat weevils are primary pests. This means they don’t only attack the grains but also many other wheat products. For example, flour, pasta, cereals, etc.

So, both adult and offspring feed on the grain and, consequently, contaminate it with every secretion that they release.

You can recognize weevil-infected grains due to the large holes caused by the exit of newly-born individuals. These grains are not marketable, and it has a serious economic impact around the world.

The adults of this species have a blackish-brown body, with pits. The elytra have yellowish spots and their length is from 3/32 to 5/32 inches.

The maize weevil belongs to the subfamily of Curculionidae and is the smallest one of the three species. The Sitophilus zeamais inhabits tropical and subtropical regions.

Sometimes, when these bugs are in stored crops, they are transported to temperate zones. However, this species does feed on the cornfield grain.

If the expansion of any of these species wasn’t under control, the impact would be of great significance. Currently, there are different plans to deal with these invasive species. These include a better storage system.

The damage that these creatures cause is very specific, and it’s mainly the hole they make on the grain after they leave it. Not only that, but they also feed on the grain itself. This, in turn, generates humidity and heat inside the grain and it attracts all sorts of insects and fungi.

As a final thought, the negative consequences are serious at an economic level because these pests reduce the quality of the grain, and, therefore, its profitable commercialization. Unfortunately, their eradication is quite difficult.

The Kissing Bug and Chagas Disease
In this article, we're going to tell you about the kissing bug, and Chagas disease, a potential consequence of being bitten by one. Read on to learn more! Read more »
Link copied!
Interesting Articles
Invertebrates
Pathogens and Diseases: Can a Fly Be a Disease Carrier?