Learn about the Different Species of Armadillo

The bony-plated armadillo is native to Central and South America, but can be found as far north as Missouri and Illinois. 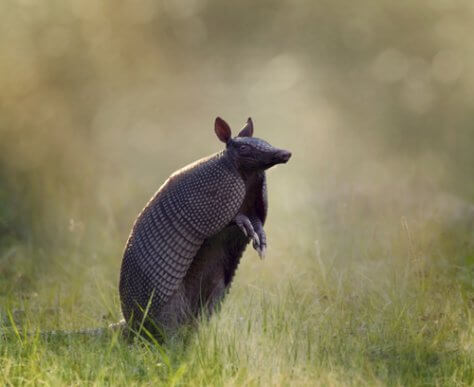 Out of all of the characteristics of any species of armadillo, the most notable is its ability to roll into a ball. This is how they avoid their predators.

This small mammal, especially native to Latin America, is related to the anteater and the sloth. It faces many dangers when trying to cross our roads. In this article, you’ll be able to get to know this creature a little better.

The characteristics and morphology of different species of armadillo

Shaped like a barrel and covered by a protective layer of bony plates, the armadillo or Dasypus novemcinctus belongs to a family of mammals that share certain characteristics. According to the Integrated Taxonomic Information System (ITIS), there are up to 21 different species of armadillo. Each species’ shells can vary in color from pink, yellow, black or gray.

National Geographic calculated that the smallest known armadillo measures only 6 inches. At the same time, the giant variety can reach well over 4 feet. When you come across one, you only need to count the number of bands on its shell to tell which species of armadillo it is.

In fact, only the three-banded armadillo is able to roll itself into a ball to protect itself from predators. This particular creature’s life expectancy is about 16 years.

Their long and sticky tongues are inherited from their close cousins: ​​the anteater. These help them to capture the larvae and insects that make up their diet.

Although 90% of what they eat is meat, these creatures are considered omnivores. This is because they also include plants and fruit in their diets from time to time. Eggs, beetles and ants are their favorite treats.

Almost all known species of armadillo are located in areas near the equator. Their bodies don’t have fat reserves. As a result, they tend to prefer warm temperatures. However, the type of soil is also a determining factor for the habitat this animal chooses. This is because porous and sandy soils guarantee that there will be many insects and larvae.

There is only one species that hasn’t chosen Central and South America as its home: the nine-banded armadillo. They can be found both in Argentina and in the United States. In fact, this small mammal has ventured as far north as Missouri and Illinois.

The gestation period can last between two and five months. After that, the female will give birth to a litter of between between 1 and 12 babies. Twin births are relatively common in these animals.

They usually stop breastfeeding at four months of age, and the pups tend to reach sexual maturity at about one year old.

The International Union for the Conservation of Nature doesn’t consider these creatures to be in danger of becoming extinct. However, it states that each species is under different threat levels. Thus, in its list of threatened species, we can find the Andean armadillo. This species’ population has fallen by 30% in the last 10 years.

Humans have used armadillos to make musical instruments. For example, the charango is a stringed instrument from the Andes. It is made of wood and an armadillo shell. This instrument is part of the Quechua and Aymara culture. However, they now make it only with wood and paper to keep this small mammal from becoming extinct.

The Strangest Animals That Exist
No, they're not animations or edited photos... These are some of the strangest animals that currently exist. Did you know that humans know less than a fifth of all the animal species on the planet? Read more »
Link copied!
Interesting Articles
Invertebrates
Can Butterflies Change the Color of Their Wings?