Are Bats Dangerous for Humans or Not?

Unlike birds, who flap their arms, bats fly with their fingers. Most of the movement is from their wrist on down to their fingers, like a human waving. This gives them considerably more control for aerial acrobatics. 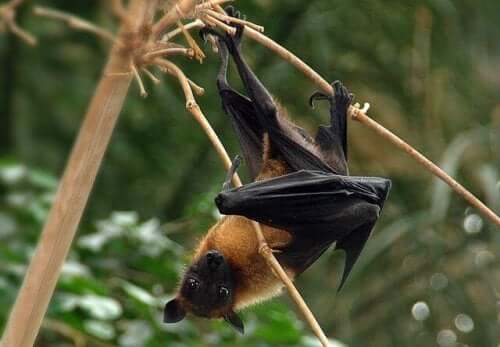 We usually relate bats to blood-sucking vampire stories, and we’re usually afraid of them. Added to the fact that they may not be the prettiest animals in the world. In addition, these animals are active during the night, which is maybe why there’s a lot of misinformation around them. In this article, we’ll try to answer this question: Are bats dangerous for humans or not?

Did you know that bats are the only mammals capable of true flight due to the fact that their upper limbs developed into wings? Or that they play a very important ecological role as pollinators and insect pest controllers? Well, now you know!

You’ve probably read these facts for the first time in your life. And you’re not the only one, because, for many people bats are strange, dark and even evil beings.

The nocturnal habits of these animals, which inhabit all continents except Antarctica, have earned them the term ‘dangerous’. Horror films and vampire stories haven’t helped them much either in this regard. Maybe this is where the belief that bats are dangerous for humans comes from.

In most parts of the planet, they are considered sinister individuals because of their ability to move in the dark, or because they sleep by day and go out at night. However, this is because their vision doesn’t allow them to distinguish things when there’s too much light!

In order to orient themselves, they use the same system that dolphins or sperm whales use: echolocation. According to the Encyclopedia of Neuroscience, echolocation can be defined as follows: the active detection, localization, identification, tracking, and interception or avoidance of targets, based on information obtained from the echoes of emitted sounds.

As a result, we can normally listen to their squealing sounds in the middle of the night. They can communicate with each other in this way and emit waves that bounce off various objects.

It isn’t very common for a bat to attack a person or bite them. However, this animal can carry certain diseases that can be transmitted to humans such as rabies, henipavirus, and severe acute respiratory syndromes.

We should also note that only a very low percentage of this species’ population is actually infected with any diseases. Moreover, this figure is much lower than cases of dogs with rabies living on the streets. Nevertheless, it’s true that rabid specimens of bat become disoriented more easily and can’t fly well. As a result, they are more likely to hide on the roofs of houses or even enter inside a home.

You don’t need to be irrationally afraid of them or try to kill them just because they appear in the garden or a garage. However, certain measures need to be taken if we find them near a baby, a sleeping person or a pet. This is to prevent the bat infecting them in some way, in case they’re carrying a disease.

In urban areas, many people are complaining that bats are appearing more than usual. They can sometimes sneak into houses as they find themselves seeking refuge when a storm breaks out.

Despite having a threatening appearance and a certain link to horror stories, the truth is that most of the bats that roam in the cities feed on insects and fruit.

Of course, there are also blood-sucking bats we call ‘vampire bats’, but they prefer remote areas to live in, away from people. Therefore, they’re more common in the fields where they can choose livestock’s blood to eat – they don’t kill any animals at all when they do this.

Not related to rodents

Bats are not even remotely related to rodents. They are such unique animals that scientists have placed them in a group all their own, called ‘Chiroptera’, which means hand-wing. Contrary to popular belief, bats are not blind. Most bats can see as well as humans.

All bats have nocturnal habits and only think about eating and staying safe when they leave their hiding place, so they have no intention of attacking a person or a pet.

Even when they detect a large moving object, such as a human being, their first reaction will be to flee, as it will consider it a predator. In this sense, bats are not dangerous for us. However, if the animal feels attacked, is sick or scared, it may try to bite to defend itself.

In sum, the best thing we can do in these cases is to avoid scaring them and help them get out of where they are and find shelter quickly. To this day, bats continue to benefit people but our ignorance and environmentally damaging behavior are threatening their survival.

The Australian Woman Who Rescues Bats
There are people who are aware of animal suffering and give their time and resources to help them. This is the case of the woman who rescues bats. Read more »
Link copied!
Interesting Articles
Mammals
What Are the Differences Between Jaguars and Leopards?