Rabies in Dogs: Symptoms and Treatment

Rabies in dogs is a dangerous and highly infectious disease. While it is fairly uncommon in Europe and the US, it's important to recognize the signs of this virus in your pet. 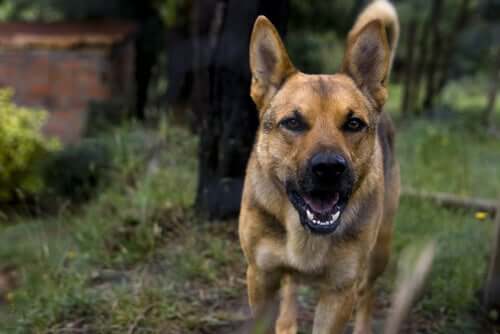 Rabies in dogs was one of the most common and alarming canine diseases of the last century. Because of the high mortality rate and the risk of inter-species infection, rabies outbreaks are considered a matter of public health and safety.

This disease is devastating in countries such as Asia and Africa. It is estimated that around 80,000 people die from rabies every year.

Today, rabies is fairly rare in the US and Europe. Huge campaigns offering free vaccinations for both pets and strays helped to radically reduce the number of cases and prevent widespread outbreaks.

The history of rabies in dogs

Rabies is a highly infectious and dangerous zoonotic virus. Because it can be passed between any mammal (including humans), it is considered a high risk to public health.

This disease is caused by a virus belonging to the family Rhabdoviridae, of the genus Lyssavirus type 1.

The pathogen begins by multiplying within the muscle cells, later spreading to the neurons and nerve cell clusters. Symptoms become more obvious when the virus reaches the central nervous system and brain, often causing acute encephalitis.

What makes rabies particularly alarming is the low survival rate. Rabies encephalitis is fatal in almost 100% of cases.

The virus is present everywhere in the world, affecting both domestic and wild mammals. In Europe and South America, the majority of cases diagnosed in humans were spread by dogs. In the US, bats were the main vectors for the disease.

How to recognize rabies in dogs?

Rabies has an incubation period of 3-8 weeks in animals, although this can vary depending on the health of the individual.

In humans, the first symptoms of the rabies virus usually appear after 4 weeks.

In the early stages of the disease, animals will often display uncharacteristic behavior. They may appear nervous, frightened or distrustful of their owners, often isolating themselves and choosing to spend more time alone. They may also be more sensitive to external stimuli such as loud noises or bright lights.

Intermittent fever is another common symptom.

Phase 2 is where we start to see the best-known symptoms of rabies. The animal becomes short-tempered and hyperactive, and may even turn unexpectedly aggressive and bite anyone it encounters.

In rare cases, the animal will seem disorientated, and have difficulty recognizing its surroundings. They may also suffer from seizures.

It’s important to be particularly careful at this stage. An aggressive dog is more likely to bite a human or other animals, and pass on the infection.

During this last phase, the animal will suffer from paralysis of muscles in the head and neck. Normally, they will later fall into a deep coma.

As the paralysis spreads, it will cause respiratory and cardiac failure, ultimately resulting in the animal’s death. However, the majority of infected animals never reach this stage.

Veterinary statistics indicate that the mortality rate goes up to 99% once the animal has reached phase 2 of the disease.

As such, it’s important to take your animal to the vet as soon as you notice any changes in behavior. Early diagnosis could save their life, and prevent the virus from spreading.

Is there a cure for rabies in dogs?

There’s no real cure for rabies once the first symptoms appear, in people or animals. Prevention is the key.

How to prevent rabies in dogs?

Responsible ownership is the best way to prevent rabies in dogs. Keeping their vaccinations up to date and treating them regularly for parasites is essential for good health and well-being.

If another animal bites your pet, you have to act fast. Experts recommend washing the wound immediately with soap and water, and seeking urgent veterinary attention.

If a human is bitten, you should also clean the wound with soap and water before seeking medical attention at the nearest hospital. A doctor will administer the appropriate treatment, which generally consists of 1 dose of rabies immune globulin, followed by 4 doses of the rabies vaccine.

In conclusion, rabies in dogs is a zoonotic disease which poses a serious risk to both humans and animals. Vaccinating your pet could save its life, and will help to protect those around it.

What to Do about Dog Bites
In this interesting article, discover interesting facts about dog bites and what to do about them. Read on to learn more! Read more »
Link copied!
Interesting Articles
Illnesses and Treatment
Small Animal Emergency Medicine: Primary and Secondary Care