If you've seen your dog go through a stomach flu or cold, you may have wondered if you could also get sick as well. Find out more here. 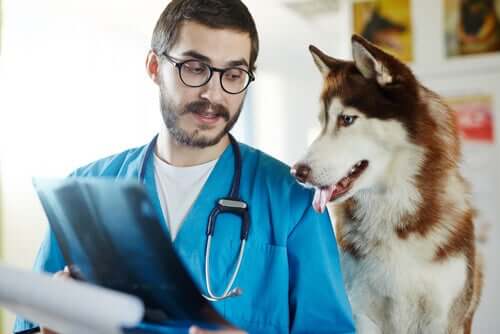 There are a number of dangerous dog diseases that can affect humans. These are known as zoonotic diseases. The word zoonotic is used to designate any disease that can be transmitted from animals to humans. The best known and most feared example of a zoonotic disease is rabies.

Although it’s possible to contract dog diseases, the odds are slim. That said, the risk of getting zoonotic diseases increases if you have a compromised immune system due to a pre-existing medical condition or disease.

Examples of these could be people infected with HIV or AIDS, pregnant women, patients being treated with chemotherapy, or elderly people. Also, people with chronic diseases of congenital deficiencies of the immune system, who have received organ or bone marrow transplants, are susceptible to infection.

Most common dog diseases that are dangerous for humans

This bacterium lives in the saliva of cats and dogs. Although human infections are extremely rare, when C. canimorsus infects humans it can be life-threatening. This disease spreads through bites and scratches. Symptoms can include blood poisoning, respiratory distress, and meningitis.

Another of the dog diseases that are dangerous for humans is Campylobacter jejuni. This is one of the most common causes of food poisoning. Although it is commonly spread through poorly cooked meats, this bacterium is also present in cat and dog feces, where it can spread to humans.

Canine brucellosis is transmitted by a bacterium which causes miscarriages and stillbirths in dogs. It spreads through vaginal secretions, urine, and, potentially, saliva. In humans, it can cause fever, fatigue, and weight loss. It also can cause inflammation of the liver, spleen, and lymph nodes.

This spiral-shaped bacteria is found in the urine of several pets. This can make its way through the skin into the bloodstream. From there, it causes fever, vomiting, and diarrhea. If left untreated, infection in humans can cause kidney damage, meningitis, liver failure, and even death.

This is a disease that attacks the skin’s surface. It affects the hair follicles and the nails as well. It’s produced by a fungus. It’s also very contagious and reproduces rapidly.

This bacterium produces disorders such as lethargy, gastroenteritis, vomiting, spontaneous abortions, and blood poisoning. If your dog has salmonellosis, you’ll need to be apart from your pet during the acute phase of the disease.

This is an intestinal parasite that reproduces rapidly. In general, it is asymptomatic so your dog could be infected, transmit it to other dogs or humans, and you might not even be aware of it. The main symptom is diarrhea, but not continuously. There may be some days where they show symptoms and other days where they don’t. This makes it more difficult to detect the disease.

Also known as sarcoptic mange, this is produced by a mite present in dust or vegetation. They feed on the epithelial cells in the host’s skin. It’s one of the dog diseases that are dangerous for humans.

If I’m at greater risk, should I give my dog away?

No! It just means that you need to be careful with your pet. There are many studies that have shown the benefits of having a pet are immeasurable, especially owners who are suffering from chronic diseases. In fact, sometimes doctors recommend getting a pet to their sick patients.

You can take several measures to ensure your safety. One step is to regularly monitor to detect signs of dog diseases. You should also consider some basic hygiene practices, such as washing your hands after handling your pet and avoiding direct contact with your dog’s urine or feces.

Preventing dog diseases that are dangerous for humans

The best way to reduce or eliminate your risk of contracting dog diseases that are dangerous for humans is simple. It comes down to hygiene and common sense. Here are some more specific suggestions:

Keeping your pet healthy will also help keep you safe from any dog diseases. It’s up to you to be vigilant and use the basic advice that we’ve given you.

Common Canine Diseases Related to Poor Diet
Common canine diseases are quite prevalent, even though at times we wrongly believe that buying cheaper dog food is the same as buying the expensive kind. Read more »
Link copied!
Interesting Articles
Illnesses and Treatment
Characteristics of Displaced Abomasum in Cows