Five Types of River Dolphins and Their Characteristics

Some river dolphins are in danger of extinction due to the dams created along the rivers so there are currently only about a thousand or fewer specimens. 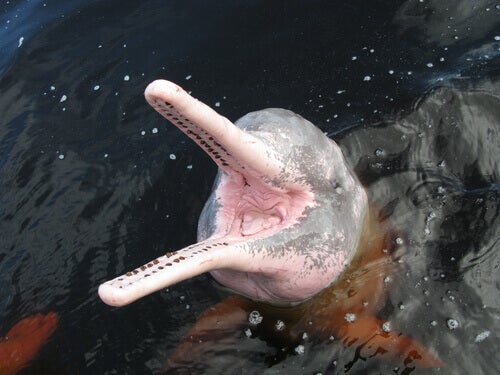 You probably imagine a beautiful animal riding the waves when you think of this mammal. There’s such a thing as river dolphins though and these inhabit fresh placid waters. Continue reading to find out more about them.

These are similar to sea dolphins in terms of build and size but differ in color (more pink or brown) and, as per the name, habitat. These are the river dolphins out there:

The boutu, boot, or bufeo is known for its pink color. This dolphin lives in the Amazon and is the largest of all its freshwater family. Furthermore, some specimens reach 7 feet and weigh over 400 pounds. Males are up to twice as large as females.

This animal easily moves through flooded forests thanks to its pectoral and dorsal fins. They eat fish, including piranhas and croakers, but also crabs and river turtles. In addition, they move their head in all directions, it’s almost as if they didn’t have fused cervical vertebrae, like other oceanic species do.

The pink color of this species isn’t always as striking, but changes according to age and sex. For instance, they’re dark gray when they’re born and remain so throughout their youth. Then the color turns light gray and then pink. In addition, males are lighter than females.

This species of river dolphin inhabits many areas in South America, specifically in the Araguaia-Tocantins river basin in Brazil. In 2012, scientists put them in a separate category and they’re no longer considered pink river dolphins. This is because several studies that compared the morphology of their skulls revealed that the Araguaia dolphin has a larger head and fewer teeth than its Amazonian relative.

There’s still not much information on the Araguaia river dolphin but estimates indicate there are about 1,000 specimens. This is why they’re now officially in danger of extinction. The main threat is the creation of dams along the rivers they inhabit.

This animal, also known as Gangetic or shushuk, inhabits the Ganges and Brahmaputra rivers, as well as in their tributaries. They inhabit areas in India, Nepal, and Bangladesh.

Their snout is brown, and it blends with the water. It’s also long and pointed (like other river dolphins) so one can see their teeth even when their mouths are closed.

Blindness is one of the best-known characteristics of this dolphin as they lack crystalline lenses in the eyes. However, they can detect light despite the fact that the waters they inhabit are murky, and guide themselves by echolocation.

Females are larger than males and gestation lasts about 10 months — the young remain close to the mother for a short time. They all feed on carp, catfish, and shrimp.

This animal is also known as franciscana and toninha and inhabits the estuary of Río de la Plata and the coasts of the Atlantic Ocean, in South America. It’s a small river dolphin that measures less than 6 feet; the females are slightly larger than the males. Their body is grayish-brown and their belly slightly lighter.

La Plata dolphin has a lifespan of about 20 years, and their diet includes fish, shrimp, octopus, and squid. Their top predators are sharks and killer whales but these are usually in the open sea; thus, this river dolphin usually stays away from oceanic waters.

This animal is also blind and inhabits Pakistan and some areas of India — where they get to run into the Ganges river dolphin. They use echolocation to hunt or move around.

Their snout is long and their body measures over 8 feet long. Moreover, they’re an endangered species and there are currently fewer than 600 of them. The construction of dams along the Indus River is the main cause of their rapid decline. This is because there are many individuals isolated from each other and they can’t always find food.

Is It True that Dolphins Feel Empathy?
These wonderful beings surprise us with every new discovery we make about them. So, do dolphins feel empathy? Read more »
Link copied!
Interesting Articles
Mammals
Meet the Squirrel Monkey