Fish, mammals, amphibians, and invertebrates make up this list of species that have adapted to the environment they live in. Although they’re blind, they developed other senses, such as touch, hearing, or smell. In this article, learn about five blind animals! 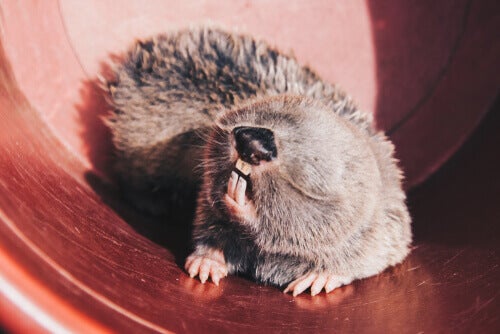 Whether they don’t have any eyes or can’t see, blind animals have been able to adapt to the ecosystems they live in. This is thanks to their other senses, which are much more developed! Discover these fascinating species below.

Are there blind animals?

In this article, we aren’t referring to specimens that, due to illness, an accident, or old age, have lost their sense of sight but rather about blind animals. Despite not being able to see, these animals do have a highly developed sense of smell, hearing, or touch and they don’t need their eyes.

We just had to begin the list of blind animals with the naked mole rat (featured on the main image of this article), a small rodent that lives in Africa (Kenya, Somalia, and Ethiopia). In addition to having no hair, it also has no eyes. Due to its eating habits, it’s considered a pest in crops.

The naked mole rat can live for about 30 years and only one “queen caste” is fertile in the colony, as in the case of bees, for example. It lives in underground tunnels dug by groups of workers, who use their incisors and front legs to build the burrow.

The naked mole-rat queen can give birth to between 3 and 12 young per year after mating with up to three breeding males. The rest, in addition to being workers, defend the young and the queen from owls, snakes, and foxes.

When we think of blind animals, the image of a mole may automatically come to mind, since almost all the subspecies either don’t have eyes or aren’t able to see underground.

The mole is an underground mammal that feeds on worms and only comes to the surface occasionally. Thanks to its legs that are shaped like a pair of paddles and its strong claws, it can dig big tunnels in the ground. It doesn’t need to see, as it orients itself through smell.

Interestingly, worms are the main food moles eat and they also belong to the group of blind animals. We just had to include them in this list! These invertebrates have adapted to living on land thanks to diffusion. Thus, they always need to be in humid environments.

Worms come out at night, dig tunnels in the ground, and eat a lot of food (organic waste) every day. Although worms don’t have teeth, they have powerful suckers (adhesion devices). In addition, even though they don’t have eyes, they can “see” through their sensitive skin.

Believe it or not, there are also blind fish, such as the Astyanax mexicanus, also known as the Mexican tetra or the blind cave fish. It’s a small fish that grows to a maximum length of 4.7 inches. It lives in tropical waters near submerged caves around the northeast coast of Mexico.

As it spends its entire life in the dark, its body has adapted accordingly. That’s why its pigmentation is clear (almost transparent), it has no eyes, its taste buds are highly developed, and it has a greater number of maxillary teeth and bigger sensory organs. The Mexican tetra feeds on worms, crustaceans, and insects.

The Texas blind salamander is an amphibian that dwells in certain caves in Texas, United States. It’s very rare. As it has no pigments in its skin or eyes, it never goes “outdoors” and lives in total darkness. The blind salamander has very sensitive skin that allows it to detect food (especially crustaceans) and avoid being caught.

A close relative, known as the olm, lives in Europe and dwells in the rocks of the caves. It’s eye-catching, if you’ll pardon the pun, because it has no eyes. However, its other senses are highly developed. The olm can live for 100 years, its body is long and flat, and it has very short legs.

6 Underground Animals and Their Habits
There are animals that live underground without any difficulty, surviving with very little light. Read more about these subterranean beings. Read more »
Link copied!
Interesting Articles
Mammals
All About the Caracal: Characteristics, Feeding and Habitat