Do you know what zoonotic diseases are and which insects can transmit them? Let's take a look! 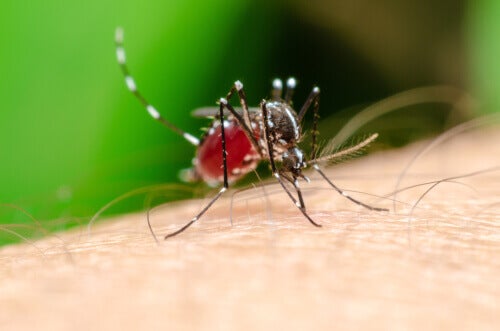 As summer arrives, lots of insects also come with it. Although we don’t like these bugs very much, they’re an important part of the fauna of our planet. In fact, mosquitoes and flies are essential pollinators. They are also a food source for many other animals. However, some of these insects are transmitters of zoonotic diseases through interaction with humans.

What are zoonotic diseases?

The term zoonosis refers to any infectious disease that is naturally transmitted from an animal to humans, or vice versa.

When a human is the transmitter, the correct term is actually anthropozoonosis.

We can all think of some diseases that have been talked about a lot in the media, caused by livestock or other agricultural species. For example, you’ve probably heard of avian flu, swine flu, or mad cow disease. Still, there are much smaller animals that go unnoticed that are capable of transmitting diseases to humans. In fact, these diseases are often more dangerous.

The yellow fever mosquito or dengue mosquito (Aedes aegypti), as the name suggests, is responsible for diseases such as dengue, yellow fever, or Zika.

This small arthropod is distinguished by its striking white bands. However, this morphology is usually not distinctive enough to differentiate them from other mosquitoes of the Aedes genus.

As you might already know, only female mosquitoes feed on blood. This atypical behavior has a clear biological reason:

Unlike other mosquitoes, Aedes aegypti is more active during the day than at night. This increases the probability that they will come into contact with more humans.

Now, let’s look at another winged animal, namely the various species of the genus Phlebotomus. Sandflies are transmitters of the leishmaniasis disease.

These insects are similar to common mosquitoes but are much smaller. They measure two to three millimeters at the most. Their bodies are also semi-transparent and covered in hair.

The protozoan Leishmania is transmitted by the saliva of the female mosquito as they bite another animal. This disease can then infect rodents, dogs, marsupials, and primates.

On the other hand, not all zoonotic disease-transmitting arthropods can fly. One example of this is ticks. While they’re not technically insects (they belong to the class of arachnids), they deserve a special mention:

However, it’s more difficult for ticks to access human beings. For example, these arachnids can’t fly so they hang on to plants, waiting to jump on to unfortunate hosts. This means that there’s an increased risk for people who live in rural settings or those who are in contact with wild mammals.

Important to the ecosystem, but with a cost

In general, arthropods are essential to the functioning of any ecosystem. As we mentioned previously, they are the main pollinators, which allows flora to grow. In addition, they also are a source of nutrients for many different species.

Even if they are threats to humans as transmitters of zoonotic diseases, it’s always important to remember that every living being deserves respect and admiration whenever they are in their natural environment.

Can Viruses Change Animals’ Behavior?
Have you ever wondered exactly how viruses work? In this article, we'll tell you about how viruses change animals' behavior to increase transmission. Read more »
Link copied!
Interesting Articles
Invertebrates
Discover How Worms Reproduce