Are There Plastic-Eating Worms?

The discovery of plastic-eating worms is not new. However, the hope of using them in the biodegradation processes lessened given their very low processing rate. Nonetheless, new reports have ignited the flame of hope. 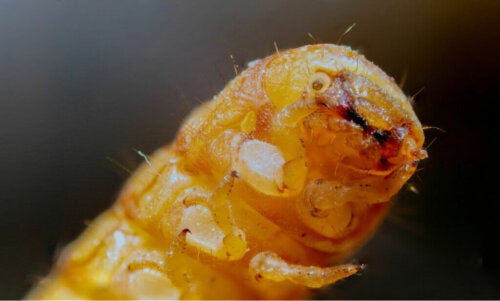 The discovery of plastic-eating worms or larvae is shrouded in hope and skepticism. According to experts, more than 320 million tonnes of plastic are used globally each year. In fact, almost every sector of the population uses this material in one way or another.

In this regard, between 1950 and 2015, plastic waste amounted to an estimate of 6.3 billion tonnes worldwide. The use of plastic has led to its accumulation as a major pollutant of land, rivers, lakes, and oceans.

With this outlook, finding animals that can achieve plastic biodegradation has been long awaited. Here’s some hopeful data on the topic.

Since the 1950s, many researchers have studied insects’ capacity to eat plastic and their ability to damage packaging. The beetles and larvae exhibiting this behavior were identified in the Tenebrionidae family, the Anobiidae family, and the Dermestidae family. However, people lost interest in these studies over time.

Subsequently, in the early 1970s, many research groups studied the polystyrene (PS) biodegradation in soil, seawater, landfill sediments, activated sludge, and compost. Thus, scientists determined that some mandibulate insects can chew and eat plastic packaging, including polyvinyl chloride (PVC), polyethylene (PE) and polypropylene (PP) packaging films. However, until recently, little was known about whether the ingested plastic could biodegrade in the insect’s intestine.

Which are the plastic-eating worms?

Recently, a group of Chinese scientists reported that waxworms (Indianmeal moth larvae or Plodia Interpunctella) are able to chew and eat PE films. They also found two bacterial strains, isolated from their intestine, that are capable of degrading them.

The same group also discovered that mealworms can eat polystyrene foam as their only diet. Mealworms are the larvae of the beetle Tenebrio molitor, much larger in size than waxworms.

In addition, a research group from the University of Cantabria reported the biodegradation of PE by the greater wax larvae of the moth Galleria mellonella. Finally, this ability to eat plastic is also present in the so-called superworms, larvae of Zophobas morio, also from the Tenebrionidae family.

In general, these worms constitute the second stage of an insect that has four stages of life: egg, larvae, pupa and adult. |Experts consider them a pest because they parasitize honeycombs (the waxworms) and grain warehouses (the mealworms), causing substantial economic loss.

On the other hand, mealworms can also be a resource. These larvae are a cost-effective animal food available in many insect markets and pet stores. Larvae are mass-produced as food for birds, reptiles, amphibians, and fish. The primary food of these larvae is bran, an agricultural by-product. Generally, it’s easy to breed them in fresh oats, wheat bran or grains with potato, cabbage, carrots or apple.

Moreover, vermicast generated by mealworms is sold as a fertilizer.

What is the mechanism that allows for the biological degradation of plastic?

In 2015, a group of Chinese researchers proved that a strain of mealworms from Beijing, China, could survive solely on plastic for a month.

When treating worms with antibiotics, this ability disappeared, suggesting that the activity of the intestinal microbial flora mediates digestion. These studies have been broadened by using strains of worms from the United States.

Therefore, we now know that the ability to degrade plastic is widespread among different strains of worms. It’s worth noting the discovery that PS degradation rates improve significantly by supplementing the diet of the worms with a conventional source of nutrition.

Additionally, scientists also determined that mealworms fed with this mixed diet can reproduce and give birth to a second generation capable of PS degradation.

The microbiome is nature’s secret weapon

The same group of researchers carrying out this line of research, has performed an analysis of the intestinal microbiome of the mealworm Tenebrio molitor. Until now, scientists succeeded in discovering the existence of two groups of bacteria (Citrobacter sp. and Kosakonia sp.) strongly associated with the biodegradation of PE and PS.

Moreover, they were able to identify other bacterial groups uniquely associated with the biodegradation of each of the plastics. These results hint at the adaptability of the worm’s intestinal microbiome that allows it to degrade chemically distinct plastics.

The study of plastic-eating worms confirms that rapid biodegradation of PS in the larval intestine is possible. Therefore, this indicates the existence of a promising plastic degradation process that can become useful in improving environmental pollution levels.

The Amazing Way Silkworms Work
Have you ever wondered how silk is made? Today, we'll tell you all about how silkworms work to produce this precious thread. Read more »
Link copied!
Interesting Articles
Invertebrates
Waggle Dance: The Dance of the Bees