Everything You Need to Know about Your Pet Beetle

Beetles are insects with an essential role in nature and can be an interesting pet under the right conditions. 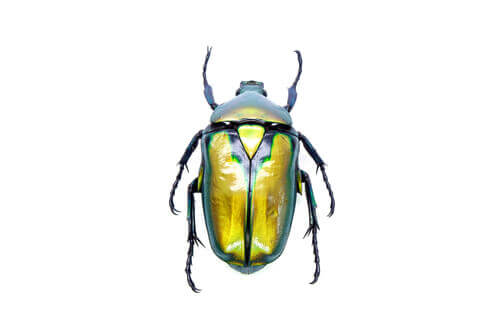 Coleoptera, better known as a beetle, is an animal people seldom think of as a pet. However, they’ve become all the rage due to their ease of care and striking colors.

Beetles play an important role in nature as they’re saprophytic animals (those that feed on debris). Today’s article will discuss a few species of domestic beetles and give you some tips on how to care for them.

There are more than 400,000 species of beetles in the world and their living conditions vary enormously. One of their most striking features is that most of them are nocturnal — although there are some diurnal species.

However, not all of them make good pets and this is mainly because people usually prefer the most colorful or striking ones.

Here are some of the most common beetles people chose as pets:

There are some showy beetles within these two genera. The rhinoceros beetle (Dynastes Hercules) and the elephant beetle (Megasoma elephas), among them.

The long-horn on the head of males resembles a rhinoceros, hence the name of this beetle. Entomologists say it’s one of the largest as it can get to be nearly 7 inches in length. As for the elephant beetle, they get their name due to their slight resemblance to this friendly mammal.

There are many showy species within this genus:

There are some highly diverse species of beetles in this genus as well:

How to care for your pet beetle

We must mention that each beetle species has its own requirements. Therefore, you must be properly informed about the needs of an animal before acquiring it.

However, as with all pets, there’s a series of general care tips to take into account:

A terrarium for beetle larvae

The terrarium must meet certain conditions, depending on the species to which the larvae belong. So, it’ll be best to investigate each species individually.

For example, soil-dwelling larvae require a thick, slightly moist layer of soil. To do this, you have to set up a box.

In it, you’ll spread a layer of soil of about 4 to 8 inches thick. The size will depend on the number of larvae and the size of the species. You must also take into account whether the larvae are “cannibals”. If that’s the case, then you must place them in separate individual boxes.

How to feed a pet beetle larvae

Specifically, soil larvae feed on decaying plant matter. Their diet ranges from leaf waste to decomposing wood. This diet can easily be found in any forest or country area. However, fresh plant matter is never a good choice. It’s for this reason that exotic pet stores also offer larval-friendly food mixes based on their species.

The type of beetle should indicate the temperature and humidity of the soil they require. Normally, you must sprinkle or pour water and mix it well once or twice a day to keep the soil moist.

Likewise, you must make sure the larvae have enough food. Do so often, as they eat quite a bit. Experts also recommend stirring the soil periodically to check if there’s food, make sure it’s accessible, and also to aerate the substrate.

Tips on how to care for adult beetles

Enclosure for your pet beetle

The species of beetle itself will dictate the environment and care. What you should know is the enclosure changes between larvae and adult individuals.

Entomologists recommend that you keep adult individuals in a glass or plastic terrarium. They must be at least five times larger than the length and width of the animal.

This is to ensure they have enough space to move around. Also, they need to have a fairly thick layer of soil and some twigs for climbing. It’s important to provide abundant environmental enrichment in little domesticated species. Thus, make sure their enclosure resembles their natural habitat as much as possible.

You can moisten the soil by spraying it with water and then stirring it. Also, you may heat the terrarium with a light bulb — make sure it won’t burn them.

This way, the beetle can warm up under the bulb or cool down in shady corners. Generally, the beetles that people keep are native to tropical humid environments. So a similar temperature and relative humidity greater than 60% should be ideal conditions. Still, keep in mind that every species has its own requirements, so do some research.

What to feed your pet beetle

Diet varies between species and some might eat fruit, grains, wood, or foliage. Also, there are carnivorous beetles that feed on insects and amphibians — these aren’t usually kept as pets though.

If a beetle eats fruit then supply it with fresh fruit such as banana, apple, orange, or grapes, among others. There are also some gelatine mixes that provide many health benefits to these animals. In fact, they’re usually inexpensive, and available online and in specialized pet stores.

A world under a shell

In short, beetles can make good pets, as they’re easy to care for. Of course, you must follow the advice mentioned above or consult a veterinarian.

Furthermore, keep in mind that there are many beetle species and that they populate many specific regions of the planet. So, make sure the one you get was bred in captivity. Otherwise, the smuggling of beetles obtained from their natural environment puts the planet’s health at risk.

The Stag Beetle: The Biggest Beetle in Europe
The stag beetle is a spectacular beetle that lives in Europe and parts of Asia. It has a very specific habitat and it's at moderate risk of extinction. Read more »
Link copied!
Interesting Articles
Invertebrates
Cockroaches: 6 Types and Characteristics