The Role of Elephants in Civilization

The role of elephants in civilization throughout history varies. They're not too different from the role they have today. 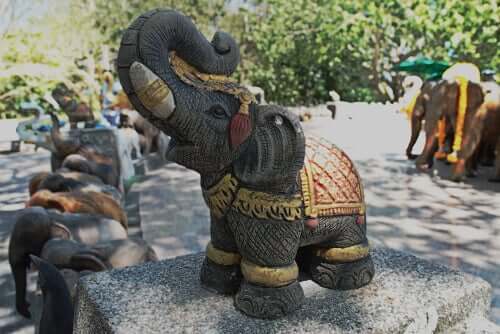 The role of elephants in civilization

Elephants are the largest and most powerful land animals and have always aroused curiosity, envy, and fear. People either worship them or mistreat them both in current and ancient times.

There are three species of elephants – the forest elephant, the African Bush Elephant, and the Asian elephant. They’ve all been kept in captivity and trained for various purposes. These have been described throughout history, and so the fact that they had an important role in many events is irrefutable. Perhaps this will help you understand the relationship of this species with humans.

India in the Vedic period

Elephants were a part of Hindu navies since the beginning of time. There are numerous stories from ancient times that describe the use of elephants as battle animals.

The first news of an elephant killed in combat in India dates from 1100 BC.

Ancient Greece has numerous data concerning the importance of elephants in the battles that defeated the emperor Cyrus of Persia, in 530 BC. In fact, the stories become even more detailed in the battle between Alexander the Great and Darius III of Persia in 331 BC.

In another subdivision of the Alexandrian Empire, Ptolemy I of Egypt built his own army of elephants. It began with the 43 Asian elephants that he captured during the battle of Gaza in 312 BC. So, Ptolemy II, his son, incorporated many of those African elephants into his army.

Many Hindu empires went down during the first millennium BC, and elephants were a very important part of such military conflicts.

Because of their impressive size, people have often used elephants as a symbol of power. Keeping them requires a lot of money, and, because of this, they’re a good indication of the status of their guardian.

During the era of the Roman Empire, the elephants captured after the battles were carried to the gladiatorial arenas. Once there humans tortured them and made them fight against other animals and also against the gladiators.

Later on, these animals became the perfect gift for European kings. For example, in 1230, the Sultan of Cairo gave an elephant to King Frederick of Sicily. The latter immediately used it to make a triumphal entry into Milan.

Elephants in civilization – beasts of burden

The elephant’s use as war animals is historical indeed. However, it goes without saying that they’re often used as beasts of burden. Wylie suggests that the use of elephants for construction, logging, and transportation dates back to the year 2000 BC.

Given their size, strength, and intelligence, many consider them living machines they can use to accomplish many things. But due to the relative importance of such works, the elephants’ mention in the books is of minimal importance.

More than 2000 years after Carthage trained elephants for war, King Leopold of Belgium developed a work school for them in the Congo. It already had 35 specimens by 1910. Then, it became known as “The Elephant Domestication Center.” However, they later abandoned it.

The first elephants participating in shows date back to Vética India in 1000 BC. And they’ve starred in many almost without a break ever since.

In addition to their torture in the Roman amphitheaters that we mentioned above, they were also trained to entertain the audience at the circuses of the time. Their repertoire included walking on the rope, dressing up in flashy suits, throwing knives, etc.

The concept of the modern circus originated in nineteenth-century Europe, in England and France. After that, it traveled all over the world and reached the American continent. By 1887, there was already a circus with 160 elephants there.

Elephants have been held captive as part of personal collections for more than 3500 years. The ancient Mesopotamian city of Ur – 2000 BC – already kept them in zoos for public display. Today, elephants remain a major zoo attraction. Sukumar estimates that more than 1000 captive African elephant specimens still live in zoos in the West.

Curious Facts About Elephants
The elephant appears gentle and doesn't scare us in the slightest. Would you like to know some curious facts about elephants? Read more »