10 Species at Risk of Extinction

Sadly, mankind's actions mean that hundreds of species are at risk of extinction. Today, we want to take a closer look at 10 of the most endangered species. 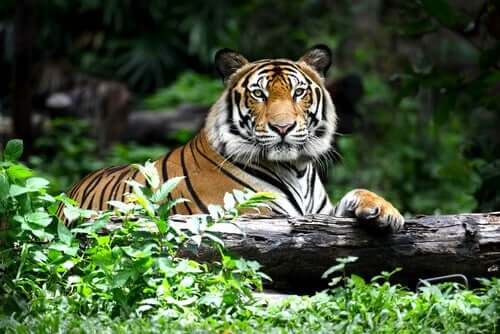 Climate change, illegal hunting, deforestation, and pollution are having a devastating impact on our planet. In this article, we’ll tell you about 10 species at risk of extinction, so that we can raise awareness and, together, help stop them from disappearing altogether.

Which species are at risk of extinction?

Unfortunately, this list would have to be a lot longer if we wanted to talk about every animal at risk of extinction today. However, we want to take a look at some of the species that are most under threat.

It’s estimated that if the Arctic ice caps continue to shrink at the current rate, the polar bear will cease to exist within 50 years. By the mid-century, the region will have lost all of its “land” mass, which serves as a home to these animals. Today, there are fewer than 25000 polar bears left. They use floating sheets of ice to hunt seals (their main food source).

There are only 40 of these leopards left in the world. While efforts are being made to prevent their extinction, seeing an amur leopard in the wild is becoming rarer and rarer. Their natural habitat is southern Russia and northern China. Poaching is the main reason they’re at risk of extinction, as their beautiful mottled fur is highly valued among collectors.

3. Species at risk of extinction – the Bengal tiger

Like the Amur leopard, Bengal tiger numbers have fallen considerably as a result of hunting. While many claim this is because they pose a danger to humans, in reality, they’re often stuffed and put on display. Add to that the fact that huge swathes of their habitat (the mangroves of India and Bangladesh) are being lost due to climate change and rising sea levels, and experts predict that by 2060, the Bengal tiger will be extinct.

According to the World Wildlife Fund, the population of Sumatran elephants (one of the largest animals in the world), has fallen by 70% in recent decades. Around 1000 elephants still live in the jungles of Indonesia. While they have no natural predators, they’re under threat from ivory hunters.

This is another species at risk of extinction because of global warming. As temperatures rise, the dry seasons get hotter. As a result, these marsupials can’t find enough water to drink or vegetation to eat. Plus, as we have seen in recent months, unprecedented wildfires have been sweeping Australia, wiping out hundreds of thousands of animals. In addition, many kangaroos are killed by cars as they try to cross roads. And, needless to say, they are also targeted by hunters.

6. Species at risk of extinction – the vaquita

Also known as the gulf porpoise, there are no more than 100 of these cetaceans left in the wild. They’re almost dolphin-like in appearance, but have black rings around their eyes. They live along the Pacific coast, close to Mexico. The main reason they’re at risk of extinction is trawling, as they often get tangled in fishing nets. Unable to return to the surface for air, they soon drown.

Japan is one of the main countries responsible for the fall in whale numbers. Their fat and meat are thought to possess medicinal powers, meaning that commercial hunting is a common practice. It poses a threat to species such as the Sei whale, the blue whale, the southern right whale, sperm whale and humpback whale.

Rhino horn is very valuable in Asian culture (especially in China), as it’s believed to have therapeutic properties. Until a few years ago, these huge animals roamed freely in Vietnam. Today, however, there are only 50 of these rhinos left, living in a protected area on the island of Java.

9. Species at risk of extinction – the sea turtle

While these reptiles lay hundreds of eggs every year and can live for decades, commercial fishing and pollution on beaches are pushing sea turtles to the brink of extinction. The population of sea turtles in the Pacific Ocean is steadily falling, while scientists and conservationists are doing everything they can to ensure that the young survive.

The orangutan, one of mankind’s closest relatives, is also at risk of extinction. This is due to a number of factors, including forest fires caused by drought, deforestation, heavy rainfall, hunting, and palm oil plantations. It’s believed that they’ll have disappeared before the year 2050.

Are All Animals at Risk of Extinction?
With all the animals on the endangered species list, you might be wondering if all animals are at risk of extinction. Read this article to find the answer. Read more »
Link copied!
Interesting Articles
Wild Animals
5 Animals that Live in Grasslands