5 Species on the Verge of Extinction

The gradual disappearance of species on Earth has irreparable consequences to the flora and fauna of our planet. 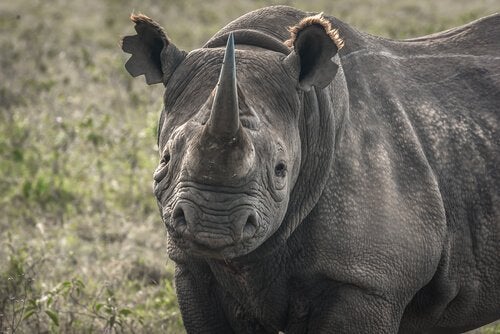 Everyone knows about global warming, the destruction of the ozone layer, and climate change. However, we don’t often focus on the main beings affected by human actions: animals. We’ll tell you about five species on the verge of extinction that won’t have a second chance unless we drastically change our relationship with the environment.

The black rhinoceros, one species on the verge of extinction

At the beginning of the 20th century, there were between five and six deaths every day of black rhinos (seen in the photo at the beginning of this article). European colonizers loved hunting and, as a result, decimated the population of this species. Unfortunately, the species never recovered. These actions added the black rhino to the list of species on the verge of extinction.

In 2011, the Internation Union for the Conversation of Nature (IUCN) declared on its Red List that this species was “officially extinct”. This was due to the hunting of the black rhino to sell their horns on the black market. However, a zoo in the Czech Republic managed to give birth to two offspring born in captivity.

With the scientific name Phocoena sinus, the vaquita is the rarest cetacean on the planet. Although it was only discovered 60 years ago, the IUCN has also placed this species on the Red List as endangered.

In 2015, the population of the vaquita was reduced to 97. Then, in 2017, the population suffered a 67% decrease. As a result, we currently have less than 40 vaquitas worldwide. Some factors that have made species on the verge of extinction are unethical fishing techniques, as well as contamination of their natural habitat.

The Amur leopard, the rarest feline on the planet

At the end of the 20th century, a group of Soviet scientists determined that there were only 30 of these leopards left in the wild. The leopard is native to the Russian Taiga. The species has begun to recover within the past 10 years, however, thanks to local initiatives.

According to the organizations Leopards of the Far East and WWF Russia, today there are more than 90 of these leopards in the wild. This animal is capable of reaching up to 40 mph, but can only run free if we work to keep current conservation initiatives afloat.

The South China tiger and poaching

In 1950, experts estimated that there were over 4,000 of these tigers. However, due to indiscriminate hunting, the population has dropped to about 80 today. As a result, regulation surrounding the commercialization of tiger bones have greatly changed in the last decade. At the end of 2018, the Chinese government considered legalizing the commercialization of tiger bones.

But after protests from the international community, China decided to postpone this measure until it could analyze the potential impact on the country’s tiger population. Although it is currently still illegal to sell tiger bones, many people fear for the survival of this species on the verge of extinction.

The Sumatran elephant, another species on the verge of extinction

The ecological organization WWF estimates that this species of elephant is about to disappear entirely. Reports from the IUCN add the animal to its Red List of Threatened Species. In addition, the group states that 85% of the elephant’s habitat is in danger of being completely destroyed.

Although as a species Sumatran elephants are protected under Indonesia law, 85 percent of their habitats located outside of protected areas, are outside of the protection system and likely to be converted to agriculture and other purposes. – IUCN Red List

The diet and lifestyle of this elephant are essential to maintain the ecosystem of Indonesian forests. Their disappearance could have irreparable consequences for the flora of this country, as well as for other threatened species. One such species is the Sumatran rhino, which coexists with the elephant in peace and harmony within its ecosystem.