Similarities between Cats and Tigers

Everyone knows that cats and tigers are in the same family, but do you know exactly which characteristics they share? 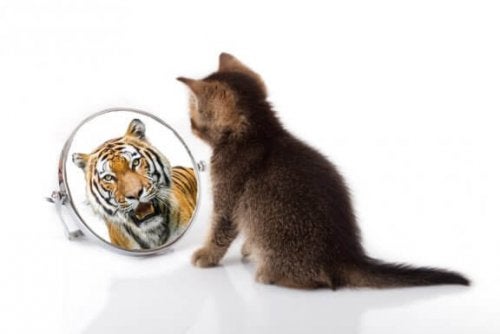 It’s obvious that there’s are certain similarities between cats and tigers. There are even breeds of cats that look exactly like small tigers, like the Bengal cat. But, in addition to the physical characteristics that are very similar, there are also other character and personality traits that are very similar.

Similarities between cats and tigers

They say that cats come from tigers, but we don’t know if that’s true or not. What we do know is that these two species have a lot in common. We’ll list a few of the similarities here:

Cats’ bodies are very similar to those of tigers; they’re both made for hunting which we can see from their anatomy and flexibility. They also share a physical characteristic in their toes, as they have five on their front paws and four on the back ones.

This is a very important aspect since it aids in their agility, momentum and speed- skills, that are very useful when hunting or running from predators. Their toes allow the animals to walk on tip-toe, almost giving the impression that they’re dancing. In this way they can be silent when stalking their prey.

The idea that cats drink milk is actually just a myth. In fact, their stomachs aren’t able to digest it well. Cat’s have a carnivorous diet, like tigers. So, meat and fish should be the main ingredients in their meals.

Pre-made cat food that you find in stores usually contains more carbs and vegetables than meat. These aren’t suitable for cats because they require more protein from meat and fish, just like tigers.

One diet that is usually recommended for cats is the BARF diet. It consists of raw and natural foods with balanced nutrients.

They mark their territory

We know that dogs mark their territory, but cats do it also (like all wild cats). They don’t like to share what’s theirs. Because of that, they’ll leave a urinal or fecal trace so that everyone understands their message of ‘this is mine’.

Cats have this same need to mark their territory. However, it’s been shown that after they’ve been sterilized, their urge to do this decreases considerably.

Don’t you just hate it when your cat comes to wake you up at the crack of dawn, but then he sleeps for twenty hours the rest of the day? Well, he doesn’t actually do this just to annoy you. It’s actually because felines’ hunting schedules are at night and at dawn. After that, they relax the rest of the day.

This is because tigers are less likely to be seen at that time of night. Given their natural habitat, and the color of their fur, this time of day is best for them. Their impressive sense of vision and hearing are also advantageous when hunting at night.

Despite their numerous similarities, cats and tigers aren’t completely the same. However, they do share 95% of their DNA, which is why they have such an impressive resemblance to each other.

The feline with the highest percentage of shared DNA with the domestic cat is the tiger (95.6%).

It’s not a coincidence that cats and tigers have similar coats, as they’re meant for camouflage. That’s why they have a variety of colors, depending on the environment they live in. Although house cats don’t need camouflage when living in a home, they’re prepared for any situation they may face.

These are the most striking similarities between cats and tigers, which are a result of their very similar DNA. Watch your own cat at home and you’ll be sure to learn a lot about these wild felines.

New Cat at Home: How to Avoid Problems with Other Cats
One of the biggest problems a pet owner may expierence when bringing anew cat into the home, is the other cats not getting along with thim. Read more »
Link copied!
Interesting Articles
Cats
What's the Origin of the Persian Cat?