Is it a deadly feline or a just another lazy cat? How much do your really know about the Bengal tiger? 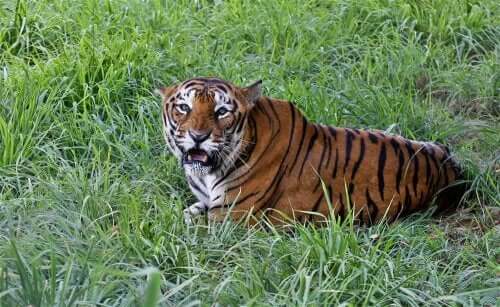 We’re all familiar with tigers… Those majestic animals characterized by their ferocity and beautiful coats. Currently, there are 5 subspecies of these beloved animals in existence. In the paragraphs to follow, we’ll share some characteristics and curiosities about one of them: the Bengal tiger.

The most famous hunter of the jungle

The Bengal tiger – or panthera tigris tigris – is perhaps one of the most famous animals in the world today. These mammals have appeared in an endless list of movies and books over the past century.

Tigers are among the largest felines that exist on earth today. Famous for their striped coat and their great strength, these animals are always a favorite among children and adults alike. Long ago, they inhabited a great part of the forest chains on the planet. However, today they find themselves at risk of extinction.

Bengal tigers are the national animals of both India and Bangladesh. Also known as the Royal Bengal tiger, they measure an average of 8 feet, 10 inches in length, and approximately 3 feet in height at their shoulders. What’s more, the Bengal tiger weighs an average of 485 pounds, although this varies somewhat according to gender.

These felines possess a very athletic body, strong claws and teeth, together with a powerful jaw and thick paws. Their fur possesses a special striped pattern that allows them to camouflage themselves among the flora of the region.

The habitat of the Bengal tiger

The Bengal tiger is one of five subspecies of tigers. They live in the area of India, where they are revered and beloved.

Usually, you can find these tigers wandering around the thick jungles and forests that surround the country. Unfortunately, thanks to human activity, they have been losing territory where they can feed, move about, and behave with complete freedom.

These gigantic cats tend to be nocturnal animals. They prefer to rest during the day in order to hunt throughout the night. Their eyes are specially prepared for seeing in the dark.

Normally, they eat between 22 and 33 pounds of meat per day. The most ravenous can ingest up to 44 pounds. However, this happens on very rare occasions.

Their diet consists of warthogs, buffalos, antelopes and other large animals. It’s very uncommon for these tigers to attack human beings. If they do, it usually has to do with the interference of humans in their environment. It may also be the result of a lack of food in the area, which causes them to have no choice but to attack humans.

Normally, Bengal tigers tend to be very solitary animals. They only seek out the company of the opposite sex in order to procreate. Gestation lasts between 3 and 4 months, resulting in a litter of between 4 to 6 cubs.

Females usually care for their babies, who stay with their mother for around 18 months. During this time, they learn from her how to hunt their prey. When this time is over, they separate from their mother to seek out their own territory.

At the International Union for Conservation of Nature (UICN), the Bengal tiger is one of the animals that they’re concerned about. In fact, the organization considers them to be in danger of extinction.

Sadly, these animals are the constant victims of poaching. Illegal hunters consider them valuable because of their fur and other organs, which they then go on to sell on the black market. Many believe that certain organs possess healing properties, and Chinese medicine normally uses some of these elements.

We hope you’ve enjoyed this article and learned something new about the Bengal tiger. Are there tigers in your country? Be sure to take care of them. Preserving animal life is part of our responsibility in caring for future generations.

The Wild Tiger: The Comeback of the Century
In the past 30 years, the number of the worldwide wild tiger population has dropped. Fortunately, NGOS and several governments are helping them return. Read more »
https://misanimales.com/tigre-bengala-caracteristicas-comportamiento-habitat/
Link copied!
Interesting Articles
Mammals
The Puma Is The Great American Predator