The Importance of Bees in the Ecosystem

Taking into account that bees pollinate a large proportion of the crops that supply the world, it's necessary to value the importance of bees for the environment. 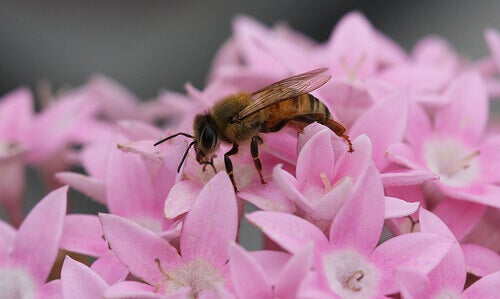 Beyond the elaboration of honey, the most remarkable work of bees is pollination. Transporting pollen favors fertilization and the formation of fruits and seeds. Part of the world’s food production and biodiversity depends on it. Without a doubt, the importance of bees in the ecosystem must be recognized.

The importance of bees

Although it’s been reported that their populations are declining, some 20,000 species can be distinguished and they do an irreplaceable job.

While bees fight for survival, these small insects collect pollen from the stamens of the plants and transport seeds. Using their body, they facilitate the union of the male gamete in the pollen grain with the female gamete in the egg.

This natural process guarantees the production of at least one third of the products that man and other species consume daily. Even the so-called solitary bees play an important role in the ecosystem. They benefit the reproduction and survival of rare or wild plants, in regions where other pollinating agents don’t act.

Without bees, agriculture would disappear

Considering that bees pollinate a large proportion of the crops that supply the world, we mustn’t overlook them. Without them, 60% of the fruit and vegetables would disappear, as well as approximately 25,000 species of flowering plants.

With the disappearance of this species, food diversity would decrease, agricultural activity would dwindle, and, with it, millions of sources of income. The lack of bees could lead to food shortages and even economic imbalance.

Is there any reason to think that bees will become extinct? The subject has kept many scholars busy since the beginning of the millennium. Many worker bees die in the hives due to the use of pesticides and other toxic substances.

Likewise, some industrialized techniques such as single-crop farming lessen the food options of these insects. Not to mention that the increase of predators and viruses spread in the environment have annihilated their colonies.

The situation is serious. In Europe alone, the decline of bees exceeds 25%, while in the United States one third is affected. Although predictions aren’t encouraging at all, there are many actions that can be taken to preserve bees.

The rescue of ecological agriculture for sustainable development, and the study of pesticides and their impact on the ecosystem, are steps that will help to preserve bees. This would also impact on soil protection, water conservation, and environmental care.

The manufacture of honey can be industrialized and return good income and benefits, but this isn’t the main function of the insect. The same can’t be said of flower pollination. Without the fertilization of plants, the food chain breaks, slowing down the birth of plant species.

The importance of bees to biodiversity is clear. Hence the need to promote and support sustainable breeding; it’s necessary to help create favorable habitats by means of crop rotation, natural pest control, and the use of organic products. Buying honey and its derivatives from local beekeepers favors sustainable activity.

Bees in the ecosystem

Bees aren’t the only pollinating vectors, but they are the most efficient, being responsible for 80% of the process. Their hairy body and the electrostatic charge they transmit make pollen adhere to them. They’re herbivorous and gain energy by taking advantage of the high sugar content of the nectar.

This type of hymenopterous insects have organs that facilitate pollination in different ways. With their special hairs on their hind legs and abdomen, they’re capable to collect pollen. Also, their mouth parts allow them to sip or suck nectar from the flowers, depending on the species.

In bees, the antennae are olfactory organs, complemented by the perception of ultraviolet light developed in order to identify flowers. Butterflies, flies and beetles also belong to large groups of pollinators, indispensable to the ecosystem.

The work of bees is laborious and slow as they have to land on about 10 million flowers in order to produce 1000 grams (35 oz) of honey. But, as we’ve seen, the production of honey is only one of the great benefits they bring us.

Waggle Dance: The Dance of the Bees
The waggle dance, or dance of the bees, is the way these insects locate food and communicate it to their partners. Find out more. Read more »
Link copied!
Interesting Articles
Invertebrates
Characteristics of Four Types of Scorpions