5 Nectar-Sucking Birds You May Not Know

Nectar-sucking birds base their diet on the consumption of nectar from flowers. Today, we'll show you some of the most beautiful flying nectar-suckers! 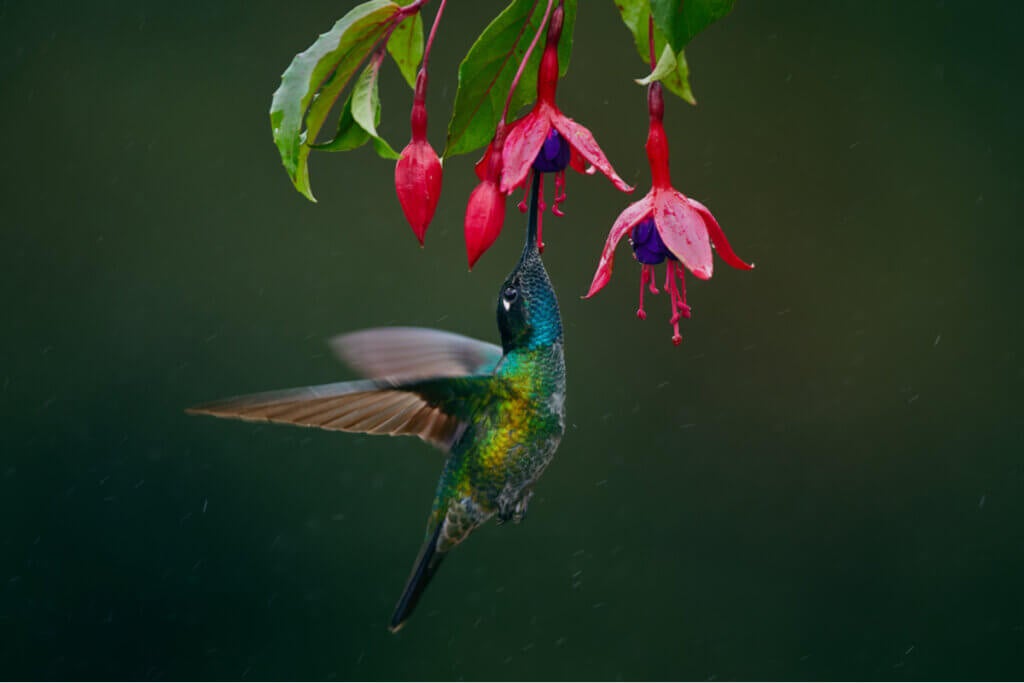 In the tropical and temperate regions of the planet there are many nectar-sucking or nectar-eating birds. Some of the most representative birds of this group are the sunbirds (Nectariniidae family) in Africa, and the honey eating birds (Meliphagidae family) in Australia.

In the neotropics, or tropical region of the American continent, nectarivory is restricted to birds of the Trochilidae family, also known as hummingbirds. Within this family, there are about 300 different species registered.

However, there are references of other species that don’t belong to this family that also seem to consume nectar. Keep reading to learn more about nectar-sucking birds!

First of all, to understand the way of life of these curious birds, you need to know what nectar is and why it’s so nutritious for these animals. However, it’s important to emphasize that no bird can depend exclusively on nectar, as it lacks several essential amino acids.

Nectar is a diluted product consisting mainly of sugar, especially sucrose. Sometimes it also contains polysaccharides, amino acids, and lipids. Nectar-producing plants use it exclusively as a strategy to attract pollinators.

Plants that birds pollinate usually have red flowers (the color birds see best) and no odor. When the bird approaches to take the nectar, it catches pollen that it can deposit on the next flower it visits. In this way, they promote the pollination of the plants.

As you can guess, nectar-sucking birds are designed to consume this substance as well as to digest it. Just the same, an exclusive nectar diet produces very serious deficiencies in the birds. Therefore, they also need to take small amounts of insects to complete their diet.

Below, we’ll show you some of the most spectacular nectar-sucking birds, as well as some interesting facts about their origin or way of life.

In Southeast Africa, we find one of the most beautiful nectar-sucking birds, the Malachite sunbird (Nectarinia famous). It belongs to the group of sunbirds that, unlike hummingbirds, perch on the plant to eat.

During the breeding season, the male sunbirds acquire a very bright green-blue coloring under the sun’s rays. In addition, two of its tail feathers grow up to 10 cm (4 inches) in length. It feeds mainly on nectar but also hunts insects.

The variable sunbird (Cinnyris venustus) is another sunbird of the family Nectariniidae. With its bright yellow chest and the rest of its body blue, which changes tone with sunlight, the male variable sunbird attracts potential mates. Females, on the other hand, have a more discreet coloration, although they also have a yellow chest.

They are expert builders of nests, which they place suspended in the branches of trees. Like other nectar-sucking birds, they increase their insect consumption during the breeding season.

The New Holland honeyeater (Phylidonyris novaehollandiae) is a bird endemic to South Australia. Males and females are very similar to one another, with a black body with a white streak. What’s more, some of their wings are yellow, and their irises are also white.

These birds usually live in large groups in order to avoid predation, although the breeding takes place among monogamous couples. They are not strictly nectar-sucking birds, as they also eat arthropods such as crickets and spiders. In addition, they consume the sugar secreted by some psyllid insects.

One of the strangest nectar-sucking birds: The hornbill friarbird

If the general physical characteristics of nectar-sucking birds are considered exclusively, the hornbill friarbird wouldn’t be included. It inhabits the tropical forests near the coasts of Queensland, Australia.

The hornbill friarbird isn’t a particularly attractive bird. In fact, its head is practically devoid of feathers, which leaves its black skin exposed. As for the rest of its body, it’s covered by a light brown plumage.

The beak is wider than the rest of the nectarivorous bird species and has a bulge that most likely plays some role during courtship.

Like the rest of the birds of this group, it feeds mainly on the nectar of the flowers. Since it doesn’t have feathers on its face, it maintains better hygiene and keeps nectar from sticking to the feathers.

The green hermit (Phaethornis guy) belongs to a subfamily of the Trochilidae family, to which hummingbirds belong. What makes this group different is that they all have an especially curved beak, joined fingers, and especially long tail feathers.

Specifically, the green hermit lives in the humid forests of Colombia, Venezuela, Costa Rica, Ecuador, Panama, and Peru. They live at high altitudes, between 2625 and 6560 feet.

As their name indicates, the feathers that cover the entire body of these birds are green in color. Like hummingbirds, green hermits maintain constant flight while sucking the nectar from the flowers.

The conservation of nectar-sucking birds

In most cases the conservation status of many nectar-feeding species is unknown. They tend to be very elusive, fast, and timid animals.

However, the constant destruction of the environment is damaging their populations. Other significant threats to these birds are habitat fragmentation, forest conversion to crops, road construction, and illegal logging.

It’s important to know that many of these birds have co-evolved with specific plant species. If these disappear, nectar-sucking birds will have nowhere to get their nectar.

The Tui: New Zealand’s Nectar Connoisseur
The tui is the only member of the family Prosthemadera. Belonging to the order Passeriformes, it gets its name from the Maori language. Read more »
Link copied!
Interesting Articles
Birds
Lesser Kestrel, the Smallest of the Falcons