Animal-Plant Pollination is an Ancestral Symbiosis

We've all heard about the role of insects in pollination, but do you know how this ancestral symbiosis between them and plants began? 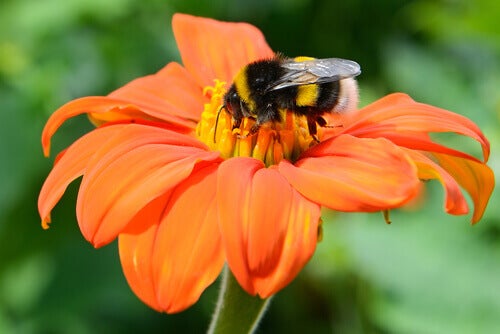 The end of spring approaches, and with it, the annoying allergy symptoms that afflict many of us throughout this season. This bothersome reaction of the immune system happens due to the entry of pollen into the respiratory tract. Pollen is rather unpleasant to us and yet is crucial to many species who perpetuate ecosystems through the ancestral symbiosis of pollination.

Indeed, the pollination process is essential for the functioning of the world as we know it. This is because plants are the basis of the food chain and the production of terrestrial oxygen. Thus, life wouldn’t be possible without it. Continue reading to find out how this ancestral symbiosis between pollinators and plants took place.

Pollination is the transfer of pollen to a stigma, ovule, flower, or plant to allow fertilization.

There are several types of methods to do so:

Pollination is an ancestral symbiosis

The relationship between plants and pollinators is a clear example of coevolution. This is because both components have evolutionarily adapted to maximize the benefits of the interaction. OK but, how did symbiosis happen?

Here’s an explanation of several studies collected in this article:

It seemed plants were at a dead end… Would it be best to protect themselves by expending energy that would decrease their chances of survival? Or should they stop defending themselves in the hope there would be no attacks? In the end, natural selection had an answer — as usual.

If you can’t beat them, join them

Plants took the most consistent evolutionary path over the centuries. They figured out a way to join and benefit from their enemies.

This is when nectar production, which has a triple function, began:

An ancestral symbiosis that’s all about cooperation

This evolutionary mechanism is exciting. It shows that nature can establish symbiotic relationships instead of predation in some instances.

In a simplified way, the plant makes a better offer to the pollinating insects: “I’ll trade you my leaves for something yummier.”

Thus, both animals and plants have co-evolved over time maximizing the benefits of this interaction.

Without Bees, There Would Be No Life On Earth
Thanks to bees, there's agricultural activity. While they feed on flowers' nectar, they transport the seeds that later grow into plants. And, these are the plants that herbivorous animals feed on Read more »
Link copied!
Interesting Articles
Invertebrates
Waggle Dance: The Dance of the Bees