The tui is the only member of the family Prosthemadera. Belonging to the order Passeriformes, it gets its name from the Maori language. 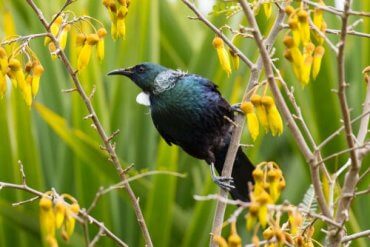 To learn more about the animal at the center of today’s article, we need to travel several thousand miles to the forests of New Zealand. There, you will find the tui, a curious and intelligent bird, with a particular fondness for nectar. Never heard of them? In this article, we’ll tell you all about them.

The tui (Prosthemadera novaeseelandiae) is the only member of the family Prosthemadera. Belonging to the order Passeriformes, it gets its name from the Maori language.

This order actually includes more than half of the world’s bird species. Members of this group are commonly known as passerines or perching birds. The most notable characteristics of the passerines include their comparatively small stature, and the peculiar arrangement of their toes.

Their body is covered with dark or black plumage, with some lighter patches of brown along the shoulders and flanks. However, when the light shines off their feathers, you’ll notice a bright iridescent sheen of blue and green. They also have a distinctive tuft of white feathers on their neck, making them easily recognizable.

The tui has a rather distinctive and noisy call, and many have reported that they are able to mimic a variety of sounds and words, much like a parrot. They also have a wide range of complex calls and songs, with each bird developing its own individual song.

The tui: a nectar connoisseur

The tui mainly feeds on a diet of nectar, which it harvests from many different flowers. However, it has a particular fondness for the New Zealand flax plant (Phormium sp.) the kowhai tree, and the kakabeak (Clianthus sp.). In a perfect example of coevolution, the flowers of these plants have actually transformed to have the same shape and curvature as the tui’s beak, making it easier for them to extract the nectar.

As well as nectar, tui also eat a variety of fruit, insects, seed and pollen. When it comes to matters such as food – and defending their territory – these little birds can become very aggressive. To defend their territory or a particularly nectar-rich plant, the tui will puff itself up to make itself seem bigger and frighten away rival birds.

Tui live throughout much of New Zealand, with large numbers living on North Island, and certain parts of South Island. Researchers have also discovered a second, subspecies, living on the Chatham Islands.

While they prefer woodland regions, you will also see them flying through urban areas such as the capital, Wellington. These animals prefer to live alone or in pairs, although on rare occasions you may see them forming larger groups.

With the arrival of colonization, the number of tui declined significantly. This was mainly due to the destruction of their habitat, and the introduction of invasive, predatory species. Fortunately, they are not currently at serious risk of extinction. The International Union for the Conservation of Nature (IUCN) has classified them as a low-risk species.

6 Most Impressive Birds
Maybe there aren't many different types of birds where you live, but in this article, we'll tell you about some of the most impressive birds. Read more »
Link copied! Next
Interesting Articles
Birds
The Violet-Backed Starling and the Secret Behind its Metallic Plumage