The Hummingbirds of Columbia and Venezuela in Full Color 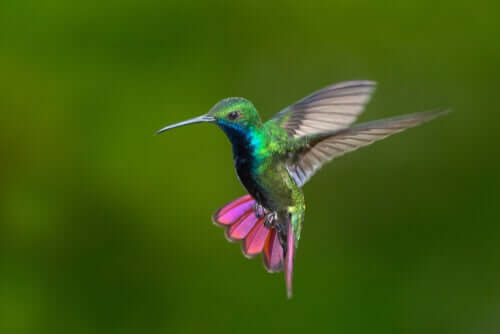 Hummingbirds are among the list of the smallest birds on the planet. Their tiny size captures our attention, as do their long pointy beaks and the way they feed on nectar. There are more than 300 species of hummingbirds in America. In general, they tend to live in wooded areas, where they have access to flowers and small insects. Today, we’ll take a closer look at the wonder and beauty of the hummingbirds of Columbia and Venezuela.

The geographic distribution of hummingbirds

Hummingbirds are unique to America and they exist throughout the entire continent. Most of the species live in Central America and tropical and subtropical South America.

The greatest wealth of these birds is found in the humid tropical and subtropical forests of the northern Andes. Therefore, in Columbia and Venezuela, we find a great variety of hummingbirds… more than 200 species!!

The hummingbirds of Columbia and Venezuela

Obviously, we can’t go into detail about all of the hummingbirds that exist in these South American countries. However, we’ll take a look at some of the most interesting species from this region.

The Oxypogon cyanolaemus is one of the hummingbirds of Columbia that’s the hardest and rarest to spot. In fact, the species hadn’t been witnessed in nature since 1946 and was believed to be extinct. But fortunately, in 2015, researchers rediscovered the blue-bearded helmetcrest in March of 2015.

This hummingbird lives in the Sierra Nevada of Santa Marta. If you really want to see one, then you’ll need to go on a special expedition. It involves six days of walking approximately 37 miles in order to reach the region where they live.

This tiny bird has long, slender feathers and a bluish-purple throat that come together in the shape of a beard. At the same, it has a prominent white crest. The white border of its face extends from the back of its head, around the covering over its ears, and towards the side of its chest.

For a long time, only one specimen had been seen, and that was in 1951. Like the blue-bearded helmetcrest, it was believed to be extinct. However, in 2004, someone finally spotted this bird in the Columbian city of Urrao.

After this discovery, the Colibri del Sol Nature Reserve came into existence in 2005, which now covers more than 28 square miles. Thanks to these efforts, you can now see the dusky starfrontlet by visiting feeding stations within the reserve.

Since 2005, experts have discovered three additional sub-populations, including one within the Tatama National Park. However, the areas that these sub-populations inhabit continue to be small. The total population of this hummingbird species is approximately 250, according to estimates.

Previously, experts considered this bird to be a subspecies of the long-tailed sylph, native not only to Columbia and Venezuela but to Ecuador and Bolivia as well. However, recent discoveries indicate that it’s an independent species that coexists with the long-tailed sylph.

The Venezuelan sylph is endemic to Venezuela. Particularly, it inhabits the Turimiquire Peak on the borders of the states of Sucre, Anzoátegui, and Monagas, y in the Cerro Negro, the highest mountain in the state of Monagas. There are also some unconfirmed records of this species in the Paria Peninsula in the north of Venezuela.

Like other species of hummingbirds, this species displays sexual dimorphism. In other words, males and females are physically distinct. It’s easy to identify males by the blue patch on their throats (gorgets), dark green, and brilliant crown.

But what most sets the males of this species apart are the external feathers of its tail which are violet in color at the base and then fade into blue at the tips. And the two shortest feathers of the central tail, which are greenish-blue.

The rest of the male’s plumage is mainly iridescent green, which is darkest at the crown. The plumage that continues is a greenish-bronze color, except for the reddish patch at its throat. The beak of the Venezuelan sylph is black and relatively short.

In contrast, the female has a green back, blue throat and frown, and white throat, chest, and belly. Its tail is shorter than the male’s, but is still quite long, green in color, and is slightly forked.

Many different hummingbirds that are interesting and attractive exist on the American continent. Those we described today from Columbia and Venezuela are just a few examples among the multitude you can discover in an encyclopedia. Just do a little research and you’ll discover even more true beauty.

The Tui: New Zealand’s Nectar Connoisseur
The tui is the only member of the family Prosthemadera. Belonging to the order Passeriformes, it gets its name from the Maori language. Read more »
Link copied!
Interesting Articles
Birds
Discover 5 Different Types of Owls