Characteristics of Moles, the Born Engineers

One of the main characteristics of moles is these underground animals are capable of creating 500 feet long tunnels. They must eat once every 24 hours, at least -- they'll die otherwise. 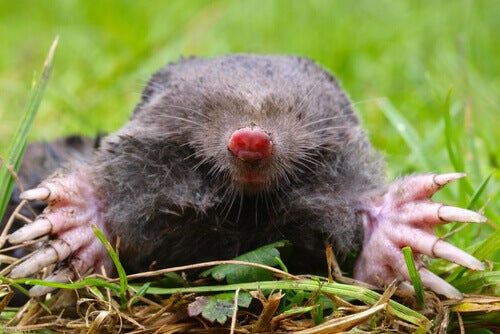 Moles are born engineers; in fact, this is one of their main characteristics. These underground cuties inhabit the north of the planet and are closely related to shrews — there’s actually a shrew mole in their family. Today’s article will describe them in detail so continue reading.

This is a placental mammal that can measure between 1 and 8 inches and weigh from 0.4 to 20 ounces, depending on the species. Thanks to its fusiform body (like that of aquatic animals) a mole can easily live underground.

Their eyes are tiny and covered with skin. This is because they don’t need to see underground and therefore have developed others such as touch. In fact, their snout, face, and extremities are all highly sensitive to the stimuli.

A mole’s legs are short and strong and the large claws allow them to dig and make tunnels up to 500 feet long. They can use their palms upwards or backwards and use them like we would use a digging shovel.

Characteristics of moles’ diet and other habits

The mole is an insectivorous animal whose diet is based mostly on worms, although they can also feast on reptiles, small rodents, roots, tubers, and fruit depending on the season. Their mouth has the ability to produce toxic saliva with which they paralyze their prey. Thus, they can store them alive until they’re ready to munch on them.

The metabolism of this animal is quite fast and they must eat between 50 and 100% of their body weight per day. They can’t skip a meal for more than 24 hours because they would die. Most of these creatures catch their food underground, except for the mole shrew – this one must surface to eat.

Most moles are both diurnal and nocturnal animals and sleep as much as they’re active. They’re loners and thus elusive and difficult to spot. You’ll only notice their burrows due to the mounds on the ground.

The mole as a plague

Those who live in the countryside or are involved in agriculture consider the mole a pest because they often damage crops. Their voracious appetite quickly takes care of any worms, plants, and roots in fairly large territories.

Humans use various techniques to try to scare them off. These range from the use of devices that make sounds and noises to the placement of mothballs and camphor in their burrows.

Three species of moles and their characteristics

The family of the Talpidae, to which moles belong, has several species, the best-known ones are:

This species is also known as European mole and inhabit the entire continent all the way into Siberia, mainly in forests, meadows, fields, and gardens. Furthermore, they measure about 6 inches, have a short tail, and share many characteristics with the rest of their species: pointed snout, small eyes, and spade-shaped front legs.

This animal inhabits North America, especially the northeast coast of the USA. As its name indicates, it’s nose is quite peculiar and has 22 mobile and flexible pink antennae. These increase their underground sensitivity.

In addition, this mole is about 6 inches long, has short dark gray hair, sharp claws, and a long, scaly tail. They reproduce during the spring-summer period, their gestation lasts 45 days, and every litter produces about six hairless pups.

This species is native to North America and is also known as Brewer’s mole. They prefer open, forested areas with dry soils and measure about 6 inches long. Furthermore, their skin is dark gray and their eyes are covered with fur. Also, their ears are internal.

In addition, both their snout and legs are pink and their nose ends in a tip. Their main feature is a short hairy tail that’s about 1 1/4 inches. Finally, they snack on insects and worms, have nocturnal habits, and are loners.

6 Underground Animals and Their Habits
There are animals that live underground without any difficulty, surviving with very little light. Read more about these subterranean beings. Read more »
Link copied!
Interesting Articles
Mammals
The Elephant Seal, a Lifetime in the Cold