Scary Looking Insects that Are Harmless

Some insects are scary looking and may even seem threatening and unfriendly to people who know nothing about them. You may not know it but most insects are in fact harmless and serve a purpose in the cycle of life. 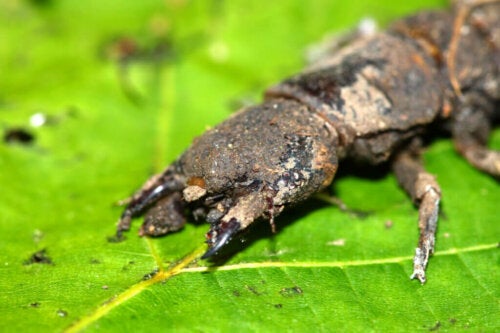 The Corydalidae are a family of large scary-looking insects. People mainly know them in their larval stage, as fishermen use them as bait.

What’s the reason for the threatening side of these bugs though? Does it have a defensive explanation or is it something else? Humans often make wrongful associations just by looking at an animal or insect and consider them a threat.

Consequently, we may want to get rid of them, overlooking the ecological importance of that species. Today we’d like to clear up a few misconceptions you might, and show you how, sometimes, the most threatening looking animals are the most amazing ones.

The Corydalidae belongs to the Megaloptera order — distributed all over the world. Their threatening appearance is due to the fact that the males have two large scythe-shaped jaws.

These insects have large wings with protuberant blood vessels. In fact, these create fascinating patterns on the surface. The wings are usually pale or brownish, with spots or varied motifs. The main characteristic of adult individuals, both males and females is they have ocelli (simple eyes).

These are considered one of the most primitive orders of holo-metallic insects (of complete metamorphosis). They produce aquatic, predatory, and long-living larvae. In addition, they’re the largest type of insects around. They’re terrestrial in the remaining stages (egg, pupa, and adult).

The larva stage is the longest of the entire biological cycle, and the adult stage is the shortest. It’s ephemeral and only lasts a few days.

The larva grows slowly and crawls under the stones on the shore when it reaches its full development (with a length of up to 3 inches) to move on to the next stage. Like all neurotropic insects, it transforms itself into a nymph inside a cocoon woven with silk.

The difference is they produce this silk via their spinning organ and then secrete it through their anus. In contrast, the butterfly’s silk comes from glands in their heads.

The adult comes out after a few weeks and has a wingspan that can reach about 7 inches.

The threatening aspect of the adult phase

The large size of these scary-looking insects, when compared to other insects, is an important factor in the fear they create in humans. However, the large jaws of the adult male are what make it scary-looking. The only purpose of these jaws is to hold the female during mating. Males don’t use these appendages to attack — unless he feels threatened.

The sialids, a Megaloptera without the characteristic scary aspect

Sialis lutaria is a primitive insect whose larvae can live for one to two years in the water, either current or stagnant. They’re carnivorous larvae, like those of the Corydalidae. In addition, they have powerful jaws in the shape of tweezers and they can easily grab a prey passing by.

The females deposit their eggs on the foliage, at the edge of the watercourse. Furthermore, they lay a single mass of eggs that can reach up to 200 units. In fact, they can lay up to 2000 throughout their lives.

The larva’s body is divided into segments; each one has a pair of articulated appendages:

The adult, who has long antennas, flies little, but if they’re disturbed they run along the stems and leaves and flutter from one side to the other. If it’s calm, it remains still, with its wings folded over its back. It may also simply walk on the plants or stones at the water’s edge.

They don’t eat during their adult life, which lasts a few days. In fact, their only purpose is to mate and reproduce in order to give rise to a new colony of predatory larvae. Once the male has fertilized the female, their destiny is to be devoured by other animals. The same happens to the females after they lay their eggs.

How important are these scary looking insects?

The presence of the larva of these species in waterways is an indicator of their quality. Most of them require clean oxygenated water without any pollution. They’ve developed certain tolerance in recent years though.

We must protect any indicator species since it helps us to know exclusive characteristics of a particular area, or the health of an ecosystem. Therefore, no matter how scary-looking an insect may seem, we must still make every effort to conserve them.

Control Insects Used for Biological Pest Control
Raphidoptera and Chrysoptera are two of the groups of biological pest control insects. They've been used for years in economic entomology. Read more »
Link copied!
Interesting Articles
Invertebrates
The Cricket: Is It a Pest or Good Luck?