The Current Situation of Freshwater Fish in Spain

The vast majority of freshwater fish In Spain are endangered due to pollution and the introduction of non-native predators into the national ecosystem. 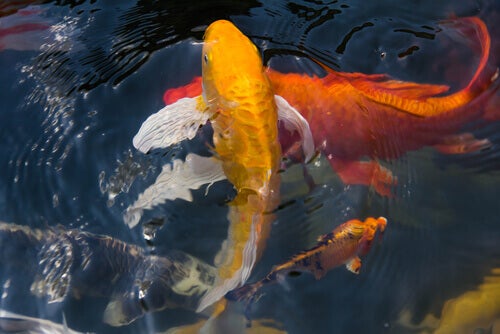 Although you can confuse saltwater fish with freshwater fish at first glance, they’re very different species. Their bodies have different metabolisms, mainly regarding the regulatory mechanism between their body fluids and the salinity of their habitat. In this article, learn all about the current situation of freshwater fish in Spain.

Some differences between freshwater and saltwater fish

Currently, freshwater fish in Spain live mostly in low salinity environments, such as lakes, rivers, lagoons, or streams. Their tissues are rich in phosphorus, magnesium, and potassium and they have a higher concentration of salts than in the external environment.

Due to their characteristics, freshwater fish don’t need to drink water and absorb it through their skin. This results in a very mild-flavored meat when cooked.

As the name implies, saltwater fish inhabit salty environments such as seas and oceans. Their bodies are rich in sodium, chlorine, and iodine. However, they have a lower concentration of salts. Thus, these fish need to drink a lot of water in order not to become dehydrated. The flavor is the meat is stronger and fuller as a result.

According to the Ministry of the Environment and Rural and Marine Affairs, only five of the more than 40 native species in Spain aren’t endangered. And Dr. Benigno Elvira, ichthyofauna expert from the Complutense University of Madrid, also warns that almost all Iberian fish are vulnerable.

Furthermore, the researcher highlights the importance of this problem. As he explains, it’s a global phenomenon that severely threatens the survival of the native fauna and flora of all continents.

This reality must stop being considered as a distant possibility, as it requires urgent solutions now and a greater involvement from society, the government, and all affected social sectors.

Causes associated with the high mortality of freshwater fish in Spain

The main cause is the deterioration of their natural habitat. In fact, most of the Spanish rivers are contaminated or affected by regulatory fragmentation or building work. In fact, experts estimate that none of the river courses in Europe remain absolutely perfectly preserved.

However, the introduction of non-native predatory animals has negatively affected the conservation of freshwater species. Currently, experts estimate that there are more than 25 exotic species in Spanish rivers, from eastern carp to the American sunfish.

Unfortunately, few freshwater fish are currently protected by law in Spain. In addition, environmental education advances very slowly when compared to the daily damage that the different ecosystems and species suffer.

Also, there’s a lack of effective control and sanction measures for companies and individuals who adopt bad practices. All this leads to direct or indirect depredation of river fauna.

Are there alternatives to recover the Spanish river fauna?

There are many alternatives to help restore part of the damage that already exists in the river ecosystem. In this regard, one of the most viable options is the restoration of riverbanks and rivers through the restoration of their flows. However, this almost always requires a high investment, as is the case with the limitation of certain economic activities.

The situation is complex when it comes to addressing the issue of exotic species. In addition to the fact that certain species are difficult to eradicate in the aquatic environment, we also face biological and ethical issues.

Thus, it’s necessary to ask some questions such as: is it fair to exterminate certain fish to save others? Could eliminating these exotic species also cause problems for native freshwater species?

Last but not least, we must highlight the water shortage many Spanish rivers suffer from. Currently, many river courses don’t even have a continuous flow of water. This is the case of the Yeltes River in Salamanca, for example. And this phenomenon also severely threatens the survival of freshwater fish.

In short, there are alternatives to protect and recover certain native Spanish freshwater fish. But this requires serious and urgent measures. Furthermore, these species depend on society, companies, and the government’s awareness and commitment.

8 Amazing Freshwater Fish
If you are thinking of setting up an aquarium at home, the easiest way is to choose freshwater fish. Find out here about the most popular choices. Read more »
Link copied!
Interesting Articles
Fish
Different Types of Water for Your Fish Tank