The House Sparrow: Is It Endangered?

If you live in an urban area, you've probably seen these little birds around. We'll tell you all about the house sparrow! 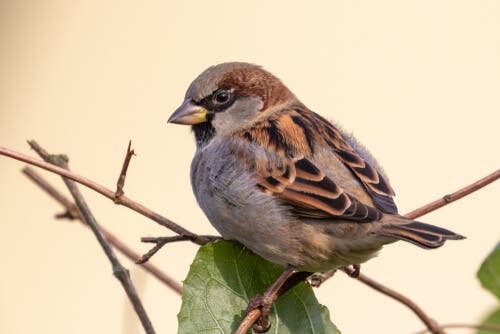 The house sparrow, although it is originally from Eurasia and North Africa, can be found today in temperate urban zones all over the world. In fact, the house sparrow (Passer domesticus) is one of the best-known urban birds. You can find it in parks, terraces, sidewalks, or wherever a crumb of bread falls on the ground.

This bird’s confidence allows them to approach crowded places without fear. They might even eat out of your hand if you offer them a bit of food on your palm. Of course, once they get what they want, they fly off to a safe distance.

How to recognize the house sparrow

Is the house sparrow a pest?

House sparrows, because they’re scavengers, take advantage of trash produced by humans. For example, in some areas they feed almost exclusively on scraps. As a result of their dependence on human activity, these birds aren’t common in uninhabited places.

Above all, their diet consists of seeds, whether wild or cultivated. In rural areas, these birds tend to steal feed from farm animals. As a result, they aren’t popular with farmers.

In warm weather, these birds feed on insects, mainly locusts and grasshoppers. The house sparrow is an expert at finding these insects. Additionally, they use these insects to fatten their chicks.

However, the house sparrow plays an important ecological role. In a very simple way, this bird helps the environment by varying what they eat. On the one hand, in the winter they eat fruits, dried berries, and seeds. On the other hand, during the summer they hunt for invertebrates. For example, they eat beetles, cicadas, grasshoppers, crickets, aphids, spiders, flies, and moths.

Experts in adapting to city life

House sparrows mate for life. They are devoted companions and parents. Additionally, they have adapted to be able to live and nest in every imaginable corner of a city. They can live almost anywhere, whether it’s on a street lamp, over air conditioners, in the cracks in buildings, or on metal window bars. In these unexpected little corners, they build their nests with dried leaves, feathers, and bits of string.

One unusual behavior of house sparrows is bathing in patches of dusty soil. They usually do this in large groups. Each bird creates a small hole in the dirt. Then, they throw dust on their feathers. This is to get rid of any parasites. However, it looks similar to elephants’ taking a dust bath.

The sparrows, originally from Africa, have developed this adaption of bathing with dust instead of water.

The avian model for scientific studies

The house sparrow has become a “model bird” for behavioral and ecological studies during the second half of the 20th century. This is primarily due to the abundance of this type of bird. Also, they easily reproduce in captivity. Scientists also use other species in studies, like the zebra finch, the rock pigeon, and the red-winged blackbird.

Today, the house sparrow is still common enough to be the focus of various research programs in both North America and Europe.

Is the house sparrow population decreasing?

In Spain, for example, the house sparrow is still very prevalent in urban environments on a national scale. In general, they’re most commonly found in spring temperatures in places with a low altitude and some agricultural soil nearby.

On the other hand, experts have looked into an abrupt decline in sparrow populations in the U.K.

These experts believe that the decrease is due to a variety of reasons. One reason is changes in agricultural practices, which reduce the availability of food. Additionally, it could also be a result of competition with other birds, loss of nest sites in cities, and problems with pesticides.