How Do Birds Actually Build Their Nests?

Birds have to time their nesting cycle so that they will be feeding their nestlings when food is most abundant. 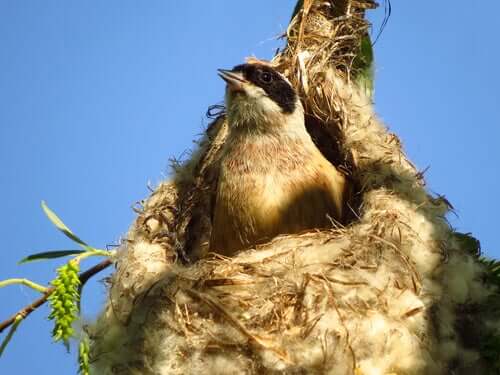 You’ve probably seen how birds go back and forth carrying twigs and assembling nests for shelter. Each species build them differently according to their needs or the number of eggs that the female will lay. Therefore in this article, we’ll be covering how birds actually build their nests. An arduous, yet fundamental task for their survival.

Learning how to build their nests

While nest-building indeed has an instinctive component to it, the truth is that birds also build their nests thanks to what they learn. Aside from the genetic component birds possess through evolution, they have also been modifying their building techniques learning from other bird’s experiences and their own.

In addition, as time progresses and after building several shelters, birds start making fewer mistakes. Therefore, they make them more resilient, less visible or more comfortable. Birds have been seen ‘playing’ in abandoned nests that later serve as a building material. In addition, these old nests also serve as an example of what to do and what not to do.

Something worth noting is some male birds will work hard in building the most beautiful, cozy and spacious nests. However, this is a mating technique they use to attract females. The latter will then choose their partners based on how well they build their nests!

The nest’s design will depend on factors such as the weight they need to support, whether they need to be concealed, or the bird’s habitat. It will also depend on the materials available in the area and the bird couple’s habits. For instance, some bird couples will hunt together and some will split tasks or take turns incubating the eggs.

One of the things that strike us the most about bird nests is that they are mostly circular-shaped. Why this shape? Because the sphere is the most stable geometric shape that exists in the universe. Of course, birds didn’t go to school to learn this. However, it’s nature itself and years of evolution that have provided them with this genetic information.

Thanks to the shape’s stability, the nest is able to bear the weight of the eggs and the birds nesting them. All of this even after the eggs hatch, and despite weather conditions such as snow, wind or rain.

On the other hand, we can note a difference between nests built by terrestrial birds or aquatic birds. In the first case, the simplicity or complexity will depend on the species and habitat. Aquatic birds, on the other hand, need to pay more attention to details since contact with water and water currents can break the nests apart faster.

However, there are some bird species that don’t build nests, but rather take advantage of spaces they find. These can be holes in tall walls, tree trunks, beach sand or among the reeds of a riverbank.

Which kinds of materials do birds use for building nests?

Birds take advantage of pretty much everything they have around them to build their homes or shelters for their young and themselves. The main building materials they use are plant-based: branches, herbs, leaves, algae, lichens or moss.

They can also use mud, as the swallow does, for instance. Sometimes they can even use animal remains such as feathers, skin, or hair. Did you know that geese and ducks use their own feathers and the cormorant their droppings to shape their nests? In the case of birds living in cities or near human populations, they often use paper, nails, twines, plastic, etc.

The choice of such materials will depend on their availability and the bird’s needs. In addition, thicker branches serve to give the nest structure and feathers or leaves give shelter and warmth to the eggs and chicks.

Although many birds nest in trees because they can find the branches they need in them, they also do so to avoid predators. Therefore, eagles and birds of prey also have their homes at the top of mountains, where other animals won’t be able to reach them.

Though most birds nest individually, some species gather together in colonies, including seabirds, penguins, flamingos, many herons, gulls, terns, weaver, some corvids, and some sparrows. Birds that nest in groups like these can benefit from protection against many predators.

This may also boost their probability of finding better food by following the best foragers among them.

Have you spotted any bird’s nests in your garden, or in a park near where you live? We hope you enjoyed this article about these fascinating wonders of nature. Until next time!