The name for parakeet, one of the most common talking birds, goes all the way back to the mid 16th century. It comes from the old French "paroquet," Italian "parrocchetto," and Spanish "periquito." 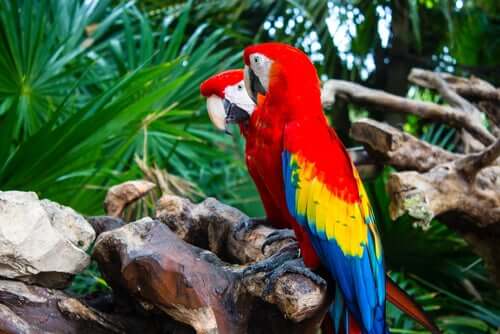 Parrots are the best-known talking birds but they’re not alone. In fact, there’s a large variety of birds capable of emitting sounds that resemble human vocalization. Today’s article is about them.

What are talking birds?

The expression “talking birds” usually refers to birds capable of mimicking human speech. This group encompasses many of the species with varying degrees of appearance and intelligence.

It’s wrong to believe that the most intelligent birds are those who can emit the most words. To easily illustrate this, just compare crows and parakeets.

Crows are some of the smartest birds out there. But they can only repeat simple words and short phrases even when thoroughly trained.

In turn, parakeets often accumulate a vocabulary of more than 1500 words with an average level of intelligence. In fact, there’s a parakeet named Puck who holds the record for the largest vocabulary among talking birds. This little guy, who made it to the Guinness World Records, can reproduce 1728 words.

Parrots – the most popular speakers in the household

This remarkable cognitive ability led many gray parrots into the “hall of fame.” In fact, the most famous talking birds of all time belong to this species.

In 2005, a gray parrot named Alex gained scientific recognition after appearing in Scientific American. Besides knowing little more than 100 words, the scientists also claimed that the bird could understand the concept of zero.

Then, there was also Einstein, one of the gray parrots most popular with the media. His ability to repeat all sorts of sounds and human speech made him gain international fame. In his most viewed videos published on the internet, Einstein imitates the sound of a cackle.

In addition, there was a gray parrot, N’kisi, who became famous due to his incomparable sense of humor. This one had a vocabulary of more than 950 words.

The six most recognized talking birds

This is the best-known species of African grey parrots. Considered by many specialists to be the most intelligent bird that has learned to mimic human speech.

These birds don’t only repeat the random words they hear. They have an incredible ability to formulate sentences that are consistent with their memorized vocabulary.

Also, thanks to their remarkable mimicking skills, they can pretty much reproduce every sound they hear.

This is the scientific name of the bird species popularly known as a budgie or parakeet. We mentioned Puck above, the one who holds the record for being able to repeat the most words, but he isn’t the only one with such a skill.

Parakeets may not be the best imitators of their kind but they can definitely develop human speech as good as their grey parrot counterparts.

A curious fact about this species is that only male parakeets can repeat words. The females haven’t developed this ability, at least not yet.

This is one of the most talkative bird species. They learn easily and coexist rather famously with human beings. In fact, they tend to easily improve their vocabulary when properly incentivized by their owners.

This beautiful species was one of the main victims of the trafficking of exotic animals. It’s for this reason that it’s on the brink of extinction, and so their upbringing in captivity is no longer legal.

The birds stand out for their cognitive ability and unique tone of voice that allows them to externalize clear and fluent words. Thus, they’re excellent at imitating human speech.

This bird is often tiny and black. They can accumulate a varied range of words and even extensive phrases. However, one of their most fascinating abilities is that they can imitate the range of tones of the human voice.

This is a small wild bird who stands out for the intense striking colors of its plumage. It’s a very intelligent species with a wonderful imitating ability. Despite its great capacity for socialization, its tenure as a pet is limited to the preservation of their species.

These kinds of birds are very attractive for their beauty, cognitive ability, and dry irreverence. However, you must note that many species are illegal as pets.

Many countries have an extensive and detailed list of exotic animals whose possession is illegal. So, you must consult it before acquiring one as a pet.

In addition, the captive breeding of endangered species is illegal in almost every country. It could lead to serious economic sanctions and penalties for their owners.

Be sure to certify the origin of a talking bird before adopting it as a pet. In addition, don’t negotiate with  individuals and businesses that don’t have updated inspections and official registrations.

The Reproduction of Domestic Parrots
If you have domestic parrots as a pet, you may have wondered about the possibility of reproduction. Today we'll tell you everything you need to know. Read more »
Link copied!
Interesting Articles
Birds and Lovebirds
Causes and Treatment of Feather Pecking in Birds