The Life Cycle of the Shrew

This is one of the smallest mammals in the animal kingdom and the most short-lived. In fact, it can die after just four hours without food. Today, we'll look at the life cycle of the shrew. 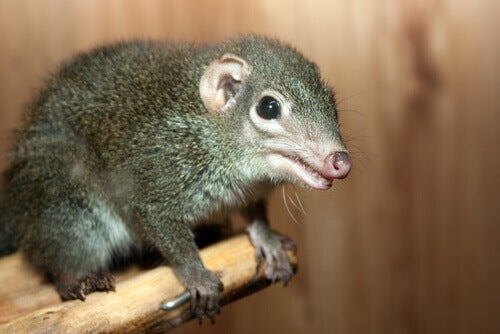 These tiny and endearing mammals are known for their long snouts. Judging by their appearance, you may think that they’re rodents; however, that’s not the case. Actually, they’re related to moles. In this article, we’ll tell you about the life cycle of the shrew, an animal that lives nearly everywhere throughout the world.

Characteristics of the shrew

These mammals are the smallest in the animal kingdom and consist of nearly 400 different species. The largest –Suncus murinus– is unique to tropical Asia, and measures only 6 inches, and weighs 3.5 ounces. The smallest of the shrews –Suncus etruscus– is native to meridional Europe and northern Africa. This tiny creature measures only 2 inches and weighs in at just 0.1 ounces.

Despite their miniature size, shrews are one of the most active mammals on the planet. They can ingest their own body weight in food every day. To do so, they hunt for food day and night, making use of their sense of touch since their vision is poor. If they spend more than four hours without food, they suffer such a serious decompensation that they can even die.

A shrew’s diet consists mainly of small insects, although they can also eat other invertebrates, like worms. They can even eat carrion, rats, and lizards. If necessary, they produce venomous saliva–as do their mole “cousins”–which paralyzes their prey.

Another one of the marvels of this tiny animal is that it can defend itself against predators. Thanks to the unpleasant smell that their special odoriferous glands produce, they can drive away animals up to three times their size.

This peculiar “aroma” makes them less attractive and interesting to these species with a keen sense of smell. For example, raccoons, dogs, and cats. However, it doesn’t have the same effect on birds of prey and owls. These birds choose to feed on shrew and trap them in full flight.

The 385 shrew species are divided into 26 genera. For the most part, they’re land animals and prefer areas with high humidity, rocky terrains, and abundant vegetation. It’s common to find them in forests, barns, and pastures. They also choose regions with a wide variety of fauna in order to meet their eating requirements every two or three hours.

The life cycle of the shrew

Taking advantage of the terrain where it develops, the shrew builds sphere-shaped nests using grass and leaves. They locate their nests in holes that already exist in the ground.

The period of reproduction takes place between February and September. However, it’s most common in May and June when temperatures go up. Gestation lasts approximately one month, and litters can consist of between two and nine offspring.

Baby shrews are born without fur and weigh less than 0.03 ounces. During their first week, they are already able to follow their mothers in lockstep. In other words, they line up behind her, each animal holding on to the tail of the animal ahead of it. At this point, they have yet to open their eyes, making it necessary for them to follow their mothers this way.

As their fur grows, they gradually open their eyes. However, they continue nursing from their mother’s milk until they are three weeks old. So, what happens with their fathers during this time? They take on the responsibility of defending the nest. They can actually be very aggressive towards intruders despite their minute size!

Shortly after abandoning their parents’ nest, shrews are already able to reproduce their own offspring. All they have to do is wait until the next reproduction period in order to produce their own descendants. And so the life cycle of the shrew continues…

Shrews don’t hibernate and live for a maximum of one year in the wild. This makes them the least long-lived animals on the planet! However, in captivity and with proper care, they can reach four years of age.

Five Poisonous Animals that Don’t Seem to Be
There's so much we don't know about the animal kingdom. In this article, we'll tell you about five surprising poisonous animals. Read more »