Gray Squirrels: Discover All Their Characteristics

This animal is considered an invasive species due to their harmful effects on other habitats where they have been introduced (Europe and South Africa). This elusive animal comes from South and North Carolina. Of each litter of four babies, usually only one survives. 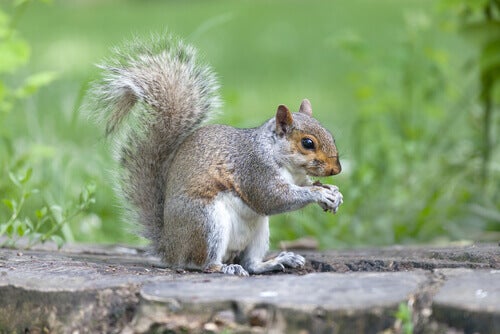 We associate this animal with walnuts and hazelnuts, as well as life in the forest. Gray squirrels are a species of rodent mammal, native to the northern hemisphere. In this article, we’ll tell you all about this animal’s habits, diet, and natural habitats.

First, keep in mind that there are different species of gray squirrels. The most popular is the Eastern gray squirrel. However, there are many other species within the family, such as the western, Mexican, Arizona, and Indian giant gray squirrels. The last species is the only type that lives outside of North America. More specifically, they live in India and Sri Lanka.

In this case, we’re going to look at the most famous gray squirrel. Their scientific name is Sciurus carolinensis. They’re native to North and South Carolina, where they’re very common. However, experts consider this species to be harmful to the ecosystem. This species has spread to the eastern and western United States, southern areas of Canada, and northern Mexico.

The Eastern gray squirrel was also introduced in Europe and South Africa. In these areas, it has become invasive and a threat to the native squirrels. For example, they compete for food and shelter with red squirrels. In addition, they have transmitted diseases that the native squirrels don’t have antibodies to fight against.

What are gray squirrels like and what do they eat?

As their name suggests, this rodent has grayish fur. However, they can also have some areas of brownish fur. Their stomachs are lighter colored. They also have thick, large tails with shades similar to the rest of their bodies.

These animals can measure up to 12 inches long. However, their tails can reach up to 10 inches. They weigh no more than 1.5 pounds as an adult. Also, similar to other squirrels, they have five toes on their hind legs and four on their front paws.

In terms of food, squirrels consume large amounts of fruits, such as walnuts, acorns, and berries. However, they also eat seeds, bark, shoots of trees, fungi, and mushrooms found in the forest. They have large, sharp front teeth to chew their food.

One of the most interesting characteristics concerning the behavior of this animal is that they hoard as much food as possible. They place food stores in a tree trunk, a cave, or a burrow, and stock up on food for the winter. As a result, during the summer and spring, you can see these animals transporting food from here to there.

These squirrels are usually out and about at twilight, as they avoid the midday heat and increase their activity after sunset. However, they aren’t nocturnal. To hide from their predators, such as owls, hawks, snakes, and foxes, they build their nests in the forks of trees.

The female gray squirrel reproduces once a year when they’re young and twice when they’re older. However, this depends on the availability of food where they live. The breeding season takes place between December and February or between May and June.

Gestation lasts about 45 days. Then, there are four offspring in each litter that feed on their mothers’ breast milk for 10 weeks. They leave the nest two weeks later.

However, only one of the babies will be able to survive to one year of age. Once they have survived this critical stage, they live for 8 to 10 years.

14 Animals With a Highly Developed Sense of Smell
Not long ago, a group of scientists studies how genes codify olfactory abilities, allowing them to know which animals have a more developed sense of smell. Read more »
Link copied!
Interesting Articles
Mammals
Characteristics and Behavior of the Capuchin Monkey