Is it a Good Idea to Have a Meerkat as a Pet?

Although it's legal to own in some countries, this popular species - popularized by Timón from the film the Lion King - is wild and aggressive. In addition, they require very specific care and environmental conditions. Otherwise, they can suffer stress in captivity and bite pets or people with their powerful teeth. 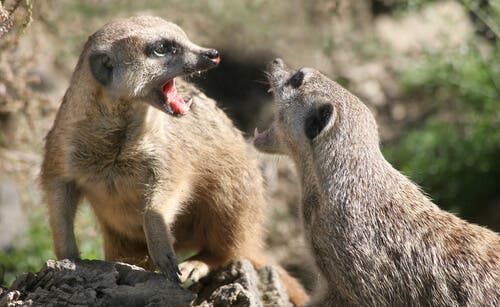 Many people wonder if you can have a meerkat as a pet. The truth is that yes, you can. However, there are many reasons why this isn’t the best idea. These considerations might raise questions that perhaps show that there are better options.

Why have meerkats gained popularity as pets?

The meerkat was previously a fairly unknown species. However, in recent years, they have gained popularity due to their charisma and appearance in the movie The Lion King.

While meerkats seem very friendly and fun creatures, don’t let this fool you. Behind their cute, furry appearance is a wild animal that may not be the most suitable pet.

Is it legal to have a meerkat as a pet?

Although it’s legal to have a meerkat as a pet at the moment, this could change. In fact, the prohibition of this animal as a pet is currently being debated. They often end up becoming an invasive species, similar to other species like raccoons.

In many countries, invasive species are banned. As a result, having one as a pet can cause serious economic penalties. This is due to the enormous impact these animals have on ecosystems. However, several experts propose including meerkats on the invasive species list because of their popularity. Another consideration is their similarity to mongooses, which have become an invasive species today.

This species may become prohibited as pets because they could become an invasive species.

A meerkat as a pet: Does their behavior make for a good pet?

This mammal is very sociable. In fact, in the wild, they live in groups of up to 40. They also spend much of the day interacting with each other.

All of this has consequences when people try to get a meerkat as a pet. These are animals that need to live in a group. Therefore, when in captivity, we recommend that they live in special centers that can house more than a dozen individuals.

If you decide to have a meerkat as a pet, it’s important to at least have a partner. That way, they have the possibility of having a family. However, in recent months, there has been significant controversy concerning the conditions these pets are sold in.

Another characteristic of meerkats is that they live in huge colonies with tunnels. These tunnels help them defend against predators. The meerkats build these tunnels themselves. In fact, they’re expert excavators!

As a result, meerkats are very expensive to maintain. These animals should have daily access to land. Therefore, it’s best to have them in a large garden. However, you would have to create a foundation of cement so that they can’t escape.

On many occasions, the lack of a place to dig causes meerkats in captivity to develop compulsive behaviors. They can direct these behaviors towards furniture or other objects. For example, they may try to make tunnels in mattresses or sofas.

Meerkats are very expensive to maintain. These animals need daily access to land. Therefore, it’s best to have them in a large garden. However, you need to create a foundation of cement so that they can’t escape.

A meerkat as a pet: Aggressive or territorial?

Another problem with having a meerkat as a pet is that these animals are naturally very aggressive and territorial. Although careful breeding and the company of other species can reduce this behavior, it’s always a risk.

It’s important to note that, although family groups don’t fight, creating artificial groups can lead to very intense fighting. This can lead to violent conflicts with other pets, such as cats or dogs. They can also even bite strangers with their powerful teeth.

Other issues of caring for a meerkat as a pet

All of these inconveniences combined with meerkats’ intelligence can lead to serious behavior problems and stress in captivity. To avoid these issues, you would need to carry out an environmental enrichment program, similar to those performed in zoos.

Another of the most important demands of these animals concerns their diet. They eat scorpions and snakes. However, in captivity, they can feed on worms and crickets. You can purchase these in stores or raise them yourself.

In addition, they consume meat, which you can provide through small rodents or chicks. This is important so you’ll need a trustworthy supplier or company that can sell you these frozen animals.

The problem is that most people can’t meet all the needs of meerkats. This is why pet meerkats often live in very poor conditions or are caged for long periods. As a result, if you can’t meet their needs, consider one of the many much more suitable pets that would be happy to be by your side.

Cooperation and Eusociality: The Strength of Unity
Many creatures work in unity which gives them a better chance of survival. There are many examples of cooperation and eusociality in the animal kingdom. Read more »
Link copied!
Interesting Articles
Mammals
Types and Characteristics of Asian Elephants