The Characteristics of the Eurasian Auroch

The Eurasian auroch is an extinct animal that's a close relative of the domestic cows and bulls we know. Furthermore, advances in genetic engineering could be bring it back into the world. 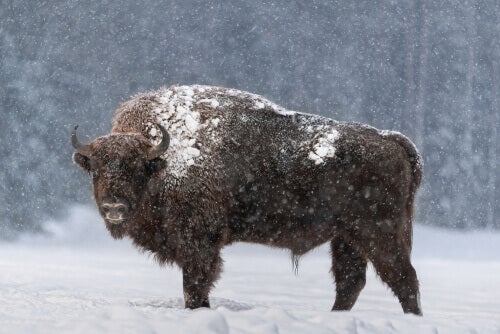 The Eurasian auroch (Bos primigenius primigenius) is the ancestor of domestic cows and bulls. They roamed freely across these plains until its disappearance in 1627. In today’s article, you’ll learn about the impressive characteristics of this huge mammal.

Up until the 17th century, most European scientists and naturalists placed aurochs and bison in the same category. Also, they claimed it was the common ancestor of modern cattle.

However, in the 18th century, some naturalists began to claim that these animals were in fact two different species:

Their review led to the realization that Eurasian aurochs and bison are clearly different. In fact, some naturalists, such as Bojanus, changed their minds and accepted the theory of the two species as valid.

Characteristics of the Eurasian aurochs

The Eurasian aurochs resembled a sort of huge bull, only with wilder characteristics. Its weight could easily reach a ton and a specimen could be about 7 feet tall — slightly shorter than the American aurochs. Thus, although similar, many things differentiate them from modern cattle:

Researchers believe Eurasian aurochs lived in herds dominated by one or two males. They established a social hierarchy through fights. These mainly occurred during the mating season — as with most mammals.

In regard to their habitat, they likely frequented forest clearings and river banks beside the aforementioned meadows. Actually, the loss of this habitat was the main factor in its extinction (more on this below).

The natural history of the Eurasian auroch

The expansion of aurochs through Eurasia

The climate was colder during the Pliocene period. Thus, there were many herbaceous meadows in Eurasia. This gave a great adaptive advantage to animals such as bovids, already accustomed to cold weather thanks to their fur and condition as herbivores. This is probably why the aurochs spread throughout Eurasia diversifying into various subspecies, some of which would be domesticated.

Domestication – the origin of our current livestock

According to several studies, during the Neolithic revolution, two domestications happened in different parts of the world.

Like most of the Pleistocene fauna, the aurochs lost their habitat. These animals had fewer places to live due to human expansion of crops and hunting.

As you can see, their population was significantly reduced to only a few hundred specimens in the Middle Ages. The last ones inhabited the forests of Poland, where they were a hunting trophy exclusive to kings. According to records, the last specimen, a female, died in the Jaktorow Forest in 1627.

The “genetic resurrection” of the Eurasian auroch

In recent years, people have proposed various programs to try to obtain specimens as similar as possible to the original auroch.

Scientists do this by crossing domestic breeds with ancestral characteristics, some of which are already in decline. Some of these breeds are the Sayagüesa, the Limia and Pajuna, the Maremmana, and the Maronesa cattle.

The genetic material of aurochs comes from fossil remains, and scientists expect to obtain the most similar specimen to date by 2025.

“Currently we’re in the fourth generation of crosses and the forecast is we’ll have the final specimen by 2025 — this is an approximate calculation. It won’t be 100% like the original auroch but very similar.”

However, one of the things that’ll be hard to recover is the character and behavior of the ancestral auroch, affected by centuries of domestication.