The Most Fantastic Antlered and Horned Animals

All of these animals have large antlers or horns, which are nothing more than bony skull extensions. They shed them every year and use them to fight with other animals of the same species during the mating season. In this article, discover the most fantastic antlered and horned animals! 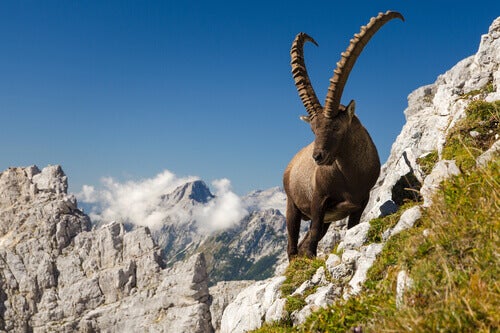 Moose, oxen, and deer are just some of the many antlered and horned animals we know of. But there are many more! In this article, we’ll tell you all about them and, above all, what the striking protuberances that grow on their heads are for.

Antlers are bony extensions of an animal’s skull that may or may not be hollow. The antlers of cervids are shed and regrown every year and appear mostly in males:

The Alpine ibex, featured in the first image of this article, is a bovid that only lives in the mountains of the European Alps. Its coat changes according to the season of the year: it’s darker and thinner in the summer, and lighter and thicker in the winter. The Alpine ibex can climb high mountains thanks to its strong legs. In fact, it has no problem climbing steep or slippery slopes.

Males have two large horns, of up to 40 inches, which are curved backward and have horizontal “lines”, as well as a kind of “beard” that grows in winter. Although females also have horns, they’re much smaller.

This cervid inhabits the Northern Hemisphere. There are about 30 different species, which differ from each other by their size, coat color, and antler shape.

It’s a large mammal that weighs 440 pounds and whose sexual dimorphism is characterized not only because the females are smaller than the males, but also because they have their famous antlers, which are shed and regrown every year.

They feed on herbs and leaves. Moreover, the females live in herds with their young and males are usually solitary. The antlers allow them to fight others and determine who “stays” with the herd.

It’s one of the “Big Five” of Africa, and it inhabits both sub-Saharan forests and savannas. It can measure up to 65 inches high and weigh 2,200 pounds. Males alert the herd if there’s danger, and guide the others to food. The only predators of the Cape buffalo are the Nile crocodile and the lion.

Also, its horns are very thick and curl back and slightly up. Although females also have horns, they’re much smaller. Other differences between males and females are that females are smaller and their coat is lighter in color. In addition, they mature earlier and live in wooded areas.

Reindeer is a species of cervid that inhabits the tundra and taiga of the Northern Hemisphere. There are several subspecies, depending on the location. In Scandinavia and Russia, they’ve been domesticated for use as transportation. But, in North America, they still live in the wild.

Male caribou can weigh up to 660 pounds, while the females up to 370 pounds. Although both sexes have antlers, they’re much larger and showier in males. In fact, they look like tree branches. These antlers are shed every year.

In addition, reindeer shed their fur according to the season of the year. In this regard, the fur is short and dark during the summer and long and light-colored during the winter. Thus, it allows it to camouflage itself with the vegetation. The caribou is a herbivore and, as it’s a ruminant, it has a four-chambered stomach.

This is a large African antelope and one of the most fantastic antlered and horned animals. It has V-shaped horns with two and a half twists, which can measure up to 47 inches.

The greater kudu inhabits woodlands and has a light-colored coat with white lines on its back in order to camouflage itself with the environment. It feeds on leaves and branches, may be active throughout the 24-hour day, and is rather slow.

It lives in several parts of Europe, mainly in mountainous areas. It also inhabits several areas of the United States, Chile, and Argentina. It’s similar to a sheep, but with shorter and darker wool.

Males are more robust than females. In addition, we can differentiate them by their horns that curve at the sides of the head (similar to those of the ram) and can measure up to 35 inches long.

It’s basically diurnal and herbivorous. Another interesting fact about it is that it forms herds according to the season of the year and the males are solitary, except for the breeding season. When this happens, it fights with members of the same sex with its horns.

8 Subspecies of Deer
Deer are rather elusive creatures and can be found throughout the world. There are more than 20 subspecies of deer, this article focuses on a handful. Read more »
Link copied!
Interesting Articles
Mammals
What Are the Differences Between Jaguars and Leopards?