This enormous feline (they can reach over three feet tall) is a hybrid breed, a cross between domestic and wild cats. They stand out for their great agility and leap to such an extent that they need to be walked on a leash. 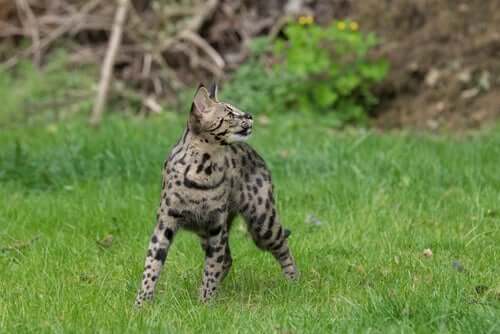 Humans like to experiment and sometimes even play at being God, and there are few clearer examples of this than cross-breeding animals. In this article, we’ll look at the Savannah cat, a hybrid breed created to look like a wild cat but with the personality of a docile and affectionate pet.

Meet the cat with wild blood

The origins of this large, beautiful cat date back to the 1980s. The breeders crossed different specimens of domestic cats with the African serval, a large cat native to Africa.

The main breeds of kittens used for the cross were:

Although this breed is banned in some places (such as some US states), certain associations have recognized it, such as TICA (The International Cat Association).

Meet the Savannah cat, a cross between several domestic cats and the African serval.

The Savannah cat, a large feline with beautiful fur

Besides their wild appearance, Savannah cats stand out for their large size, much larger than the average cat. They can measure between 2 and 3 1/2 feet and weigh between 18 and 40 lb, although some have reached up to 50 lb.

However, it’s important to clarify that as the wilder genes decrease, their size decreases, and they become closer to the size of a domestic cat. Current crosses are only bred using kittens of the breed itself.

Their fur is also striking. Although it’s short, it ranges in color from orange to amber with brownish tinges and black stripes and dots. When you stroke them, it feels almost like velvet.

There is also the white Savannah cat, which has a cream or white coat with a mottled pattern.

This breed has a very strong, sleek body with thin, agile legs. They have a medium-sized head with large ears and slightly rounded eyes which can be green, brown, or yellow. Their tail is also long and thin with well-defined, dark rings.

If you’re thinking of getting a Savannah cat, we don’t recommend it if you haven’t really had much experience with cats before. Having said that, they don’t have any major problems with children.

They’re intelligent, curious, and mobile creatures who are expert jumpers and agile climbers. Sadly, this also makes them great escape artists, especially if they’re chasing something. This means you need to take extra care to keep them in the home.

For this reason, as well as their size, they’re not recommended for a small apartment. And when they do go out each day, it’s best to walk them on a leash like you would with a dog.

Active and fearless, they like to play with their owners and are likely to follow them around. They tend to show a preference for a single member of the household and may even lick them as a sign of affection.

This being said, the generations closer to the original serval genes are usually less attached and affectionate. But those generations with a smaller percentage of wild genes will be calmer and will behave very much like a common house cat.

The Savannah cat is a healthy breed

Savannah cats need to be fed good-quality food, and you should avoid feeding them cereals or industrial by-products.

As for hygiene, brushing them every so often should be enough, but you may need to clean their eyes occasionally with a moist gauze pad.

These are generally very healthy pets, and there’s nothing in particular that you should keep an eye out for.

However, obviously it’s important to still make regular visits to the vet and keep up with their deworming and vaccination schedule.

Bengal Cats – A Very Special Crossbreed
Bengal cats are a cross between domestic cats and the Asian leopard cat. We'll tell you all about them in today's article. Read more »
Link copied!
Interesting Articles
Cats
What's the Origin of the Persian Cat?