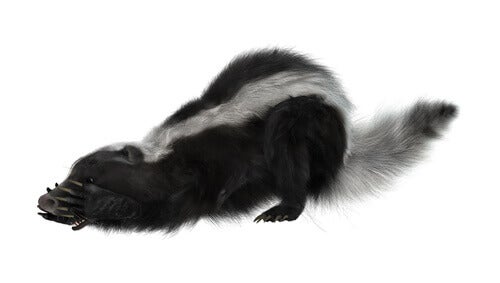 It’s common to come across a stinky smell of skunk spray on the road. Surely, their strong odor will allow you to detect the presence of this animal even before you see them, if they’re close by. Anyone who ever caught a whiff of it will agree it’s one of the most unusual smells in nature.

A skunk’s friendly appearance is counterbalanced by their characteristic smell. As is often the case with everything natural, there’s a reason for this smell.

The life of a skunk

The great pressure with which they expel the liquid allows it to reach a distance of more than four yards. They keep predators at bay this way.

Actually, this scent system can scare away large and powerful animals, such as bears. The ability to spray from long distances, combined with the speed at which they can escape and their ability to hide, keeps them safe in hostile environments.

Ways to eliminate the odor of skunk spray

A person who gets a skunk bath on their clothes, backpack, or car will smell like it for a while. The perfume will also circulate if the skunk has impregnated the household pet.

It isn’t easy to eliminate this odor as it seems to settle in the nose and nothing can make it go away. It permeates clothing, carpets, and even skin, and remains there for months, so a sprayed person must act quickly.

It may be necessary to repeat the procedure more than once. We also advise alternating the methods, and airing the rooms is always good for eliminating odors.

This isn’t as serious as it seems and it’s just a strong smell. Some people believe that skunks just go around the world spraying everyone who crosses their path, but this isn’t true.

In fact, their capacity to spray the musty substance is limited and they only have enough to do so about five times in one session. It takes up to six days for them to generate it again after they’ve depleted the reserve.

Imagine you’re sprayed and the liquid gets into your eyes. No problem, just flush it out with plenty of water. The irritation may last for a while, but it won’t blind you as some claim.

There are even warnings as to when a skunk is about to release their liquid weapon: they raise their tail. So, just get out of their way if you get a warning.

The Most Incredible Defense Mechanisms in the Animal Kingdom
Some flee quickly, others hide. There are some that blend in with their surroundings and others that play dead. The defence techniques in the animal kingdom are truly incredible. In this article, we'll tell you about some of the most fascinating! Read more »
Link copied!
Interesting Articles
Mammals
Pikas or Whistle Rabbits: Habitat and Characteristics