Horned lizards defend themselves against their many predators mainly through immobilization and camouflage. However, they also have other tricks up their sleeve. Keep reading to find out more. 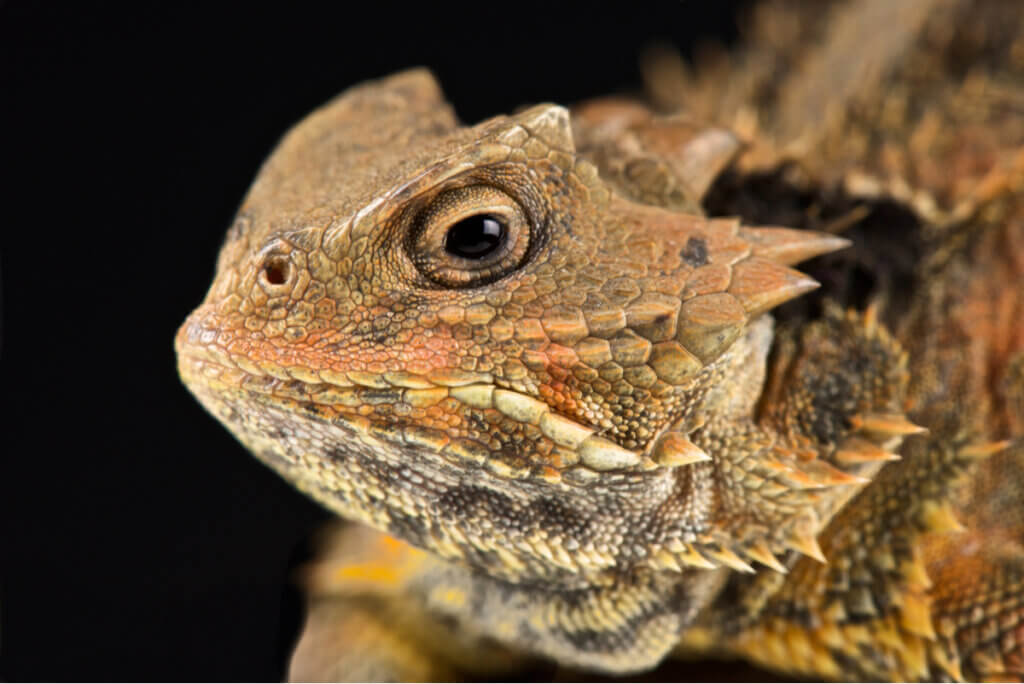 So far, there are 20 known species of horned lizards, all in the genus Phrynosoma. Each of them differs according to color, size, and the amount and arrangement of horns and spines along their backs.

Most are the size of a pack of cards, as they have wide, flat bodies and short, stunted legs. When they run, they give it their best, but speed is definitely not one of their strong points.

Undoubtedly, the horned lizard’s gift is defense. It has to be, as many neighbors will try to eat them. Some species of horned lizards are known to eject a stinking stream of blood from the eye when cornered.

Where can we encounter a wonderful horned lizard?

Horned lizards live mainly in dry places. From Guatemala and Mexico, through the deserts of Arizona and California, to the dry grasslands of southern Canada. They’re usually prey to hawks, shrikes, roadrunners, snakes, coyotes, foxes, wolves, lynx, and even carnivorous grasshoppers. In fact, in the desert areas, any animal that sees it would eat it.

A master at hide-and-seek

Undoubtedly, camouflage is their first line of defense. The horned lizards combine their colors with their surroundings, blending in with the brown brush or the mottled gray mud. In fact, some species imitate inedible objects. This is the case with the roundtailed horned lizard. This animal is almost indistinguishable from the rocks when it hides, curves its back, and tucks in its feet.

Freezing and nerves of steel

Undoubtedly, many predators detect their prey when they move. The horned lizard knows this and has mastered the art of stillness. It’s surprising to know that the arrangement of the horns on the edge of its body breaks up the shadows they cast on the ground. It’s like an invisible cape.

In a test of nerves, when a predator approaches, the lizards are reluctant to move. They do so only after evaluating the danger, carefully considering their attacker, and what the appropriate defense might be.

The first plan of defense for horned lizards is to stick to the basic program of being hard to find. In this case, it helps to be flat and squashed, with sharp edges.

The strategy to adopt depends on the attacker

Canids, like dogs, use teeth and claws to cut their prey into small pieces. Snakes swallow their food whole. Meanwhile, a grasshopper mouse will prefer to bite them through the skull to get to the brain.

Whip snakes are fast and actively hunt their prey. Since the corpulent horned lizard has no way to escape its attack, it chooses to camouflage itself and stay still. However, rattlesnakes don’t chase their prey. Rather, they wait for prey to be close by before attacking.

So, when a horned lizard encounters a rattlesnake, it runs for its life. These lizards know that this elongated predator will probably not follow. Of course, no defense is foolproof. In general, standing still for a whip snake and running away from a rattlesnake are the best bets for a horned lizard.

Even if the horned lizard gets caught, there’s still hope

Even in difficult circumstances, the horned lizard will have some cards up its sleeve. If the attacker is a snake or bird, like the roadrunner, they will have to swallow their prey whole. This thorny reptile will not make it easy.

When the time comes, the horned lizard will bend over its front legs and spread its ribs to form a dorsal shield. Or, it may swell its torso to become as large as possible. Surprisingly, these techniques work. There have been cases in which a whip snake gives up because it simply cannot fit the entire lizard in its mouth.

Of course, sometimes camouflage and armor aren’t enough and the predator eats a horned lizard anyway. But even then, they sometimes manage one last act of defiance. It’s is not unheard of for horned lizards to lodge themselves in the throat or stomach of a bird or snake. And, as a result, the attackers die.

The reptile that cries blood

Finally, there is the best-known defense of horned lizards: a stream of blood. This strategy is reserved for two groups of predators: Cats and canids, which include dogs, coyotes, and wolves.

The process is very simple. A bag under the eyes of the lizard, the ocular sinus, swells as it fills with blood. The lizard manages a sudden increase in pressure and the blood gushes out with incredible force. In fact, it can travel up to two meters.

This gives them the opportunity to “launch” their blood, which is not to the liking of these hunters. Once it reaches the attacker’s mouth, the mammal shakes its head, salivates profusely, and tries to expel it. In some cases, they can take up to 15 minutes to recover.

Why do blood jets work?

This lizard’s blood contains a chemical that is abhorrent to the palate of canids and cats. Therefore, blood defense is most effective when the lizard shoots the liquid directly to the mouth, rather than to the eyes or nose. This could explain why horned lizards often wait until the last second when they are already in the jaws of their attackers before shooting the blood.

The lizards probably get this unpleasant taste in their blood from their diet (they eat highly poisonous ants).

To preserve amphibians and reptiles, we must understand the story of their lives. Only from understanding can we plan the recovery of species and their ecosystems. Research and appropriate dissemination are essential in achieving this goal.

Reptiles
The Grass Snake: Between Water and Land

Grass snake, ring snake, and water snake are all common names for the species Natrix matrix. This friendly looking snake…

Reptiles
Why Do Chameleons Change Color?

Animals that change color have always amazed humans. In most living things, the coloration is due to dead tissues, such…

At first glance, you can easily confuse salamanders and lizards. However, they're different species with different habitats, diets, daily habits,…

The relationship between crocodiles and humans has never been a friendly one. But are they really as dangerous as we…