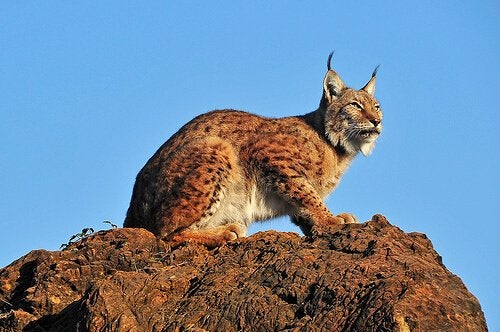 The Iberian lynx is quite well-known because there are many other species of lynx, and together they have managed to dominate a large part of the planet’s ecosystems.

Lynxes are medium-sized wild cats that weigh around 10-30 kg, so they are far from being “big cats,” many of which exceed 100 kg. Lynxes have pointy hairy ends on their ears that improve their delicate hearing. They have short tails because they have no need for them to balance on trees or use them as a rudder during chases, like other wild cats do.

They hunt small prey such as rabbits, although the larger lynx species can hunt small hoofed animals like deer. They are solitary animals, like most cats.

The Iberian lynx is the most threatened cat in the world. However, its conservation has recently been changed to a lesser threat. Nevertheless, this animal is still in danger of extinction, since there are only 500 specimens according to recent censuses.

This lynx is medium-sized and weighs around 13 kg, although males weighing up to 20 kg have been seen. Its main prey are lagomorphas, which is why one of its main threats is a lack of rabbits, which takes place due to infectious diseases such as hemorrhagic virus fever or myxomatosis.

It is usually has a brown or grayish coat with its flanks covered with black specks. It is mainly found in Andalusia, specifically in Doñana and Sierra Morena. In recent years, the population has spread to Portugal, Toledo and Extremadura. Iberian lynxes have even been seen traveling to the northern peninsula.

In addition to the lack of rabbits, another great threat are cars, which is why more wildlife crossings are necessary. Poaching or the absence of genetic variability are other dangers that they face.

This is the smallest of all the lynx species, with a somewhat smaller size than that of the Iberian lynx. This is a North American that inhabits the entire continent.  It weighs around eight kilos or sometime up to seventeen kilos, which is twice the size of a domestic cat.

It is not in danger of extinction because they live throughout the content. However, there are 12 subspecies and some of them are in great danger. In fact, the red lynx is considered the most hunted feline in the world. This is mainly due to a lack of hunting regulations.

The red lynx is considered to be the most hunted feline in the world.

This species of lynx is the largest of all, reaching up to 30 kg. It is one of the predators with the greatest ecological niche worldwide, since it occupies a large part of Eurasia.  This species can be found in several countries such as Turkey, China, Russia, Germany or Tibet and also has several subspecies and a large variety of prey.

So, the size and population of northern bobcats allows them to take down different types of prey such as camels, oxen or reindeer. However, just like other Lynxes, they have a high liking for rabbits.

Although the total censuses of the species are not in bad shape, they are endangered in some countries due to poaching. Currently, Spain has refused to reintroduce the species (like the French did) due to having conflicts with humans.  This case is similar to what happened between farmers and wolves, despite the fact that the northern bobcat lived in the Cantabrian Mountains and the Pyrenees 400 years ago.

This lynx shares some of its habitat with the red lynx. It lives in the cold, conifer forests of the northern United States, Canada and Alaska. For this reason, this species has a much thicker coat than the others, and it molts less. Its light gray coloring camouflages it in the snow.

This species is the second biggest and, therefore, can hunt grizzly cubs with ease. Once again, the main threat of these animals is being poached for their hides.