The Gorilla: Characteristics, Behavior, and Habitat

In this very interesting article, discover the characteristics, behavior, and habitat of the gorilla. 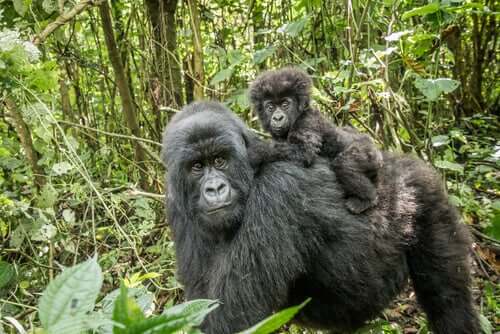 Who doesn’t remember childhood visits to the zoo where they fell in love with the majesty and power of the gorilla? This animal has been a part of our lives since childhood, although it lives in remote countries. Today, we want to get to know more about this amazing animal.

It’s the king of the primates, and certainly the largest. You should know that many gorilla species became extinct. But today we know two: the eastern gorilla and the western gorilla.

In this regard, you should also know that the Africans named this animal; its name means hairy person. Seemingly, the first specimens appeared in Africa about 25 million years ago. However, the first official observation record was Thomas Savage’s, an American doctor who was a missionary in Gabon. This happened in 1847.

Know more about the gorilla, king of the primates

This animal can grow up to 5.9 feet (1.8 meters), meaning that some specimens are a lot taller than many people. Males can weigh up to 297 pounds (135 kilos). However, females weigh only half that.

Its mouth is large, and it has a very broad, flat nose and very small ears. This animal has 32 teeth similar to human teeth. Gorillas shed their milk teeth or deciduous teeth and develop sharp canine teeth as they mature. Also, just like humans, gorillas have unique fingerprints.

Its fur is gray and black and covers its entire body except for the face and chest, in which it only has thick, porous, and wrinkled skin. As it ages, its hair turns gray.

The gorilla has the ability to walk upright, but it usually walks on all fours. This perhaps makes it easier for them to gain momentum to pick up speed.

The gorilla is protective of its own and will become aggressive if it feels threatened or if any member of its family is threatened. Contrary to popular belief, it isn’t chauvinistic and is affectionate with females and its offspring. Gorillas use some kind of verbal or nonverbal language that allows them to communicate.

Although they live in small groups or troops, they’re definitely pack animals. All troops have a gorilla leader that protects the rest. This gorilla will fight anyone who threatens the troop.

In its natural habitat, it can live up to 50 years of age. However, this animal is living fewer and fewer years due to damage caused by humans. Various organizations fight for the needs of gorillas and seek to preserve their lives for longer and improve their quality of life.

Gorillas are vegetarian, although they can eat ants or termites in some cases. However, their diets should be based on leaves, stems, roots, trees, and herbs; they also eat some fruits.

Despite the fact that it eats very healthy food, the gorilla usually sleeps 12 to 13 hours each night and may suffer the same diseases as humans, such as cancer, ebola, pneumonia, and others.

This is a very peculiar animal with a strong resemblance to humans. What did you think about this amazing animal?

Are All Animals at Risk of Extinction?
With all the animals on the endangered species list, you might be wondering if all animals are at risk of extinction. Read this article to find the answer. Read more »
gri
Link copied!
Interesting Articles
Birds
Lesser Kestrel, the Smallest of the Falcons