Who is Jane Goodall? 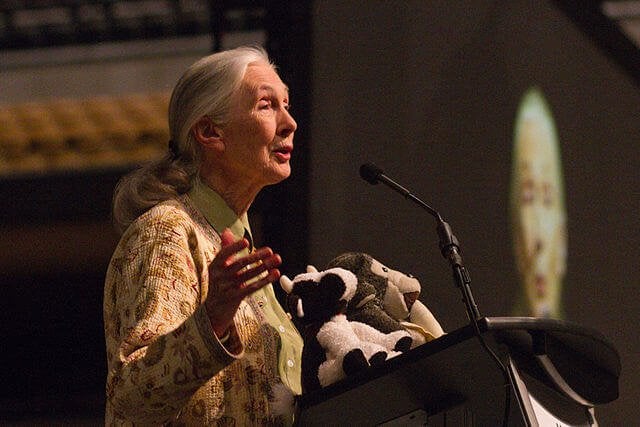 Jane Goodall is without a doubt, one of the most influential women in history and one of the greatest activists for animal conservation and protection. However, her story is less well-known than the great work that she has done.

Jane Goodall, a Woman in the Jungle

Jane was born a long way from Africa, in the bustling city of London. However, during her childhood she developed a profound love of animals and a great fascination for Africa. This led her to embark upon her life’s adventure.

Young Jane, having no specialist studies of animals at all, ended up in Africa helping the palaeontologist, Louis Leakey. Leakey quickly saw that Goodall had great potential for the study of wild animals and he sent her and her mother, to Tanzania.

Jane became one of the first researchers in this field, living in a hostile place, where women researchers were rare. But time and time again, Jane proved herself and her potential, to the community and to the other researchers.

Jane Goodall began observing chimpanzees without having previously studied them. This meant that she could observe them without prejudice of any scientific consensus that was in place at the time. It was also during that time, that scientists believed animals were beings who could not feel emotions.

Her mentor, Louis Leakey, sent her to study for a doctorate in Ethology without having completed any university study before. Goodall worked on her thesis for five years, studying chimpanzees in the Gombe National Park, which is still going, fifty-five years after it first opened.

Together, the so-called, Leakey’s Angels (Galdikas, Goodall, and Fossey), would make important discoveries in their respective fields of study: orangutans, chimpanzees, and gorillas. This gave the study of primatology a more empathetic, rigorous, and feminist perspective.

Jane became one of the first researchers in this field, living in a hostile place, where women researchers were rare.  Time and time again, her potential proved her skill to fellow researchers and to the local community.

But Jane’s research did not stop with her doctorate and she refuted many theories defended by the scientific community at the time. For example, she showed that chimpanzees carry out some of the most incredible hunting techniques in the animal kingdom. She also demonstrated that they were not exclusively vegetarian.

She also transformed our concept of being human. Until Jane Goodall’s research, scientists believed that humans were the only beings to create tools. Human beings were defined as creators of tools, and no other animal was capable of such things.

However, Jane discovered a chimpanzee using branches to access an anthill. This paved the way for a completely new field in animal ethology. Thanks to Jane Goodall, today we now know that the use of tools in animals is much more widespread.

Jane’s studies demonstrated that chimpanzees had different personalities. This revelation received a lot of attention at the time. She was convinced that animals felt emotions. She herself had proven the existence of emotions in dogs by studying her own pet.

Jane began to pay attention to the devastation of forests in natural parks. She began to realize that chimpanzees and other animals were suffering at the hands of man, far from the idyllic place where she was studying these animals.

This led her to begin touring primate experimentation laboratories, circuses, and natural parks. In doing so, she began to see how the species that she loved so much were captured; treated like pets, sold to the circus, or used for cruel experiments. She decided she could no longer look the other way and this is how she became the activist she is today.

In fact, she founded the Jane Goodall Institute to support this activity. She also set up the Roots and Shoots project, which allows children around the world to suggest ideas and actions that will help to defend animals. Today Jane calls to the hope of new generations to avoid global ecological disasters.