5 of the Smallest Cat Breeds

Size may play a pivotal role in households where there's not a lot of space.Take a look at 5 of the smallest cat breeds that are in this article! 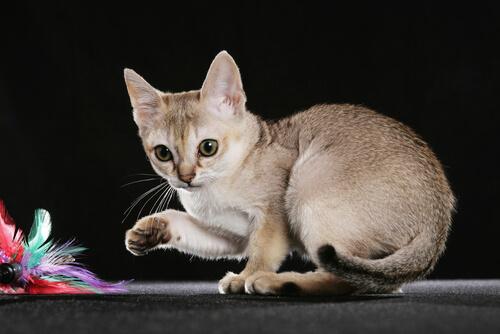 If you want to adopt a pet but don’t have a lot of space at home, then a good idea would be to choose among some of the world’s smallest cat breeds. Some breeds are characterized by their small size even when they become adults. In this article, you can take a look at a few of them.

What are the smallest cat breeds?

Maybe you don’t have a lot of space at home or you prefer a pet that’s easy to take care of. If that’s your case, we recommend to choose from the following smallest cat breeds:

Even though it’s an old breed, these cats received the recognition they deserved a few decades ago. This breed originated from Singapore, where it’s very common to see them walking down the street, and later became famous after being taken to France and Britain.

These cats’ personality is what makes people choose them as pets.

This is one of the smallest cats out there. They came about after crossbreeding two common domestic cats from the UK, in the county of Devon.

These cats have a thick, wavy coat. The best part of all is that this cat breed doesn’t shed that much and they’re great for people who are allergic to cats. Also, the Devon Rex draws attention due to their large ears and hypnotic oval eyes.

The Devon Rex emits a soft, almost imperceptible meow and they’re very loving and watchful animals. You’ll definitely want to have them as a pet!

This cat is originally from the United States and, in addition to their small size, they’re also known for their curly coat, like that of a poodle, and their short legs. These cats appeared after crossing two breeds: The LaPerm and Munchkin. This is why these cats are known as an “Experimental breed”, which is why they can’t participate in certain competitions.

The Skookum can weigh about six pounds. They still look like kittens even when they’re adults.

Their name comes from an American tribe, which means sweet, funny, and intelligent, which is their three main traits!

These cats are very affectionate and love to be surrounded by their families. They’re perfect for houses or apartments.

This is an old cat breed that originated from Thailand. However, these cats were recognized outside Asia only a few decades ago, when they began to be exported to Europe and the United States.

The Korat has a very compact and elegant body with a long tail and ears. They can weigh between four and eight pounds and have a silver-blue coat. These cats are quite affectionate with their families, but they tend to be unfriendly with children and strangers.

This breed is very intelligent and they prefer living in quiet environments. They love playing and spending several hours jumping and running around. Their meow has a particular melody, but this cat breed also uses other sounds to express what they want.

The last breed on this list of the smallest cat breeds came to be after a natural genetic mutation. These cats have very short legs. However, they can still walk, jump, and play. The same gene in Munchkin cats is present in dogs such as Basset Hounds or Dachshunds.

The Munchkin is a small cat that weighs about six pounds. They have a long, silky coat that comes in different colors and patterns. They’re very active, playful, bold, and curious cats, which makes them perfect for homes with children.

If you want to adopt a small cat, these are the best breeds to choose from. They don’t need a lot of care, are loving, will adapt to your home, and will become your best company ever!