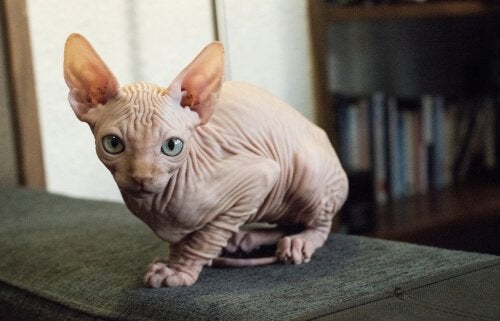 Because of their particular traits, low distribution around the world, or in some cases, due to being a recently new cat breed, exotic cats definitely can catch people’s attention. In this article, you can read about some truly original, unique cat breeds.

Maybe you’re looking for a pet that “no-one else has” or one that’s different to what you’re used to. Exotic cats are a great way to enjoy having a house cat while also having a more original pet. Some breeds are the result of natural mutations while others are due to human intervention.

This cat was created at the end of the 1970s and their main trait is that it’s hairless. In reality, their coat of fur is so tiny that it looks like they were bald. These cats are very vulnerable to the sun and the cold because they don’t have such protection like other cats.

The Sphynx also has a small head in relation to their body and very large pointy ears. Other particular physical traits are their large eyes which is why they have such a hypnotic stare.

If you’ve always wanted a big house cat, but realized that this is impossible, then this breed is perfect for you. It’s one of the newer breeds that was just officially recognized in 2001.

The Savannah came into this world by crossbreeding a common domestic cat and certain breeds of African wild cats. Therefore, their spotted coats get people confused with leopards or ocelots. They are a bigger-sized cat that weighs up to 15 kilos (most cats weight about 4 kilos).

This is another one of those cat breeds that gets everyone’s attention because they look like they have no ears. It actually they do, but they’re so small and “fall inside” their head. It’s a breed of Scottish origin which was the outcome of crossbreeding a Swedish female and a male British Shorthair.

The same genetic mutation which makes them look so strange is the same one that causes early-age arthritis, an extremely painful condition. Scottish Folds are fluffy, have a lovely face, are friendly and calm, and get along well with children and other animals.

This is a breed that comes from Thailand where they have been known about for hundreds of years. The name of this cat means “white gem” in the local language, although in the rest of the world they are called the Diamond Eye Cat. This is because they have different colored irises (blue and green).

The final cat on this list of exotic cat breeds accident was created in the United States in 1982, due to a natural genetic mutation in just a single member of the litter. When she was born, the original “LaPerm” cat was just the same as her siblings, but with much less fur.

When she reproduced for the first time, she gave birth to five males with very frizzy and soft, different-colored fur. Their tail is thick and fluffier than the rest of their bodies. As for their personality, LaPerms can be active, cheerful, and very affectionate.

There are other exotic cats that are not on this list, such as the Cornish Rex, Teacup Persian, Russian Blue, and the Japanese Bobtail.