The German Longhair is a quite but sociable breed and doesn't seem to conform to the stereotype of the independent cat. In fact, they're constantly seeking affection. 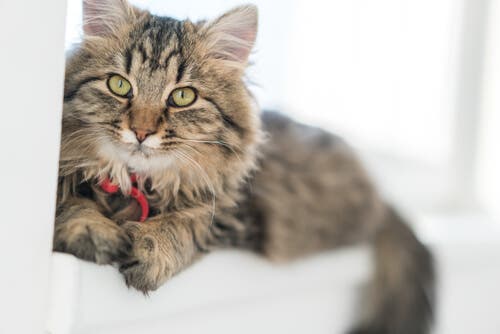 There was a time when we simply called all fluffy long-haired cats ‘Persians’. However, each of them has their own name and belongs to breeds approved by official cat clubs. And, today, we want to tell you about the majestic German Longhair.

All about the German Longhair

As the name suggests, this breed originated in Germany, and the breed standard was proposed in 1929. However, it didn’t become internationally recognized as a breed until 2008! And, even then, this was a provisional standard which wasn’t made official until 2013.

This makes it one of the breeds that have had to wait for the longest to be recognized. Since its first appearance in Germany in 1929, many people instantly took a liking to the majestic animal.

However, because it wasn’t an official breed, many people of particular standing decided not to have one because of the lack of social status.

During the Second World War, it almost disappeared, but thanks to some dedicated breeders, this beautiful animal was preserved so that we could enjoy it today.

This breed’s most obvious feature is, without a doubt, its hair. It’s long, fluffy, and very soft, making them irresistibly cuddly. They’re medium-sized animals and can weigh between 6 and 13 pounds.

They have a fairly rectangular body but an almost perfectly round head with a strong jaw and a wide, medium-length nose. Their ears are erect with a wide base and rounded tips, something which is quite different from many other breeds.

Their eyes can be either oval or round and their eye color always matches the color of their fur. However, this doesn’t apply to cats with cinnamon, lilac, chestnut, or chocolate color fur.

These cats are very calm and sociable. In fact, unlike other cats, which are highly independent, this cat needs constant pampering. This makes them great for children as they love to play.

This sociable nature makes them also great for living with other pets or farm animals. They don’t care whether they live in a big house or a small apartment. They’re quite happy just to be with the family. They have a very well-balanced character and rarely get stressed.

Caring for a German Longhair

As is often the case with many breeds of cat, the German Longhair requires some special attention. The most obvious thing that needs taking care of is their hair. Even though cats clean themselves all the time, they will need daily brushing to remove debris and keep their fur shiny and silky. This is especially the case during the molting season when they can lose quite a lot.

There have also been some instances where these cats have developed degenerative problems such as deafness. However, this only seems to have happened in isolated cases involving albinos.

It’s very easy for us to lazily call any old long-haired cat a ‘Persian’ cat. But, as you can see, this breed is quite unique and certainly deserves some proper recognition.

Furthermore, this breed’s personality is so different from other cats that you’ll be sure to easily tell them apart. Maybe you’d even like to adopt a German Longhair yourself!