Group III Cats from the FIFe Classification of Cat Breeds

In this very interesting article, discover the group III cats from the FiFE classification of cat breeds. Read on to learn all about them! 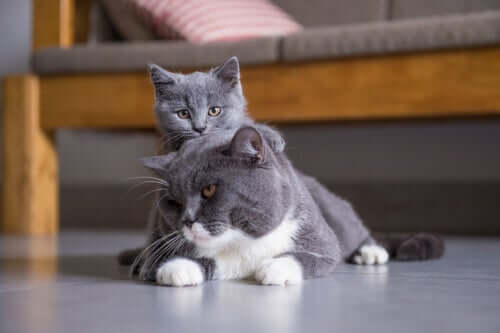 The Fédération Internationale Féline is responsible for identifying and grouping cats according to their characteristics. In the following article, we’ll tell you what the group III cats from the FIFe classification are. Don’t miss it!

What are the group III cats?

This category is the one with the most breeds (16). The best-known group III cats are:

This hybrid emerged after the crossing of a leopard cat with a cat from the United States. Its name is derived from the leopard cat’s scientific name: Prionailurus bengalensis. It’s a muscular, robust, and large cat that can weigh up to 19 pounds (9 kg). With a bushy tail, broad head, strong jaws, broad nose, and small ears, the main characteristic of the Bengal is its coat, as it’s similar to the leopard cat’s.

It’s a great swimmer, which is another peculiarity in relation to other breeds. The Bengal is a hyperactive and very curious cat that’s also loving and builds close bonds with its owner (this cat may even follow its owners around the house). It’s like having a miniature leopard at home.

This cat has a double waterproof coat that protects it from the British weather. Its ancestors are Roman cats. Since it nearly became extinct during the World Wars, people resorted to the Persian cat to continue the breed.

This cat is very sweet and affectionate; it loves caresses and feeling loved. It gets along well with children and plays even after reaching adulthood. But, of course, it also likes peace and quiet. It adapts to an apartment in the city or to country life. The British Shorthair can have a white, black, gray, chocolate, cinnamon coat, or any combination of these.

This is a grayish cat with characteristic orange eyes. It always looks like it’s smiling and, although it became popular in France (Charles de Gaulle loved the breed), the first specimens came from Turkey and Iran. It nearly became extinct after World War II.

This cat has a muscular, agile, and flexible body; the paws are round with blue-gray pads, the ears are medium in size, and it has “plump” cheeks. The Chartreux is a calm and quiet cat. It’s believed that this cat “copied” the vow of silence of the time, as it was the favorite pet of monks.

It develops a great devotion to its owners (similar to dogs) and is likely to follow them around the house. This cat is quite homey and prefers cooler environments. It only has two kittens per litter and takes time to develop sexually.

This is another of the group III cats with a particular characteristic: tail suppression. This means it has a very short tail, or no tail at all, due to a natural mutation of the spine. Several stories explain why this may have happened. For example, that it resulted from the crossing of a cat and a rabbit or that it arrived late to Noah’s Ark, which is why he closed the door on it, cutting its tail off in the process.

This cat is originally from the Isle of Man in England during the eighteenth century. It has a muscular body and two layers of silky hair. Although it prefers quiet environments, if it comes into contact with the outside world, it’ll develop its hunting instincts. It isn’t shy and always wants its owner’s attention.

As the name suggests, it’s native to this North African country and is one of the oldest cat breeds in existence. It can be seen in the wall paintings from the days of the pharaohs. This cat was taken from Cairo to Italy and has a characteristic spotted coat.

Its body is long, muscular, and slim. Its hind legs are longer than its front legs, and its paws are delicate and small. This cat from the group III cats is intelligent, independent, affectionate, friendly, loyal to its owners, and somewhat territorial and possessive with its toys.

13 Cat Breeds You Didn’t Know Existed
If you like seeing unique animal breeds, read on! We'll tell you about 13 cat breeds you didn't know existed and that might just surprise you. Read more »
Link copied!
Interesting Articles
Cats
What's the Origin of the Persian Cat?