Devon Rex, a Cat Who Doesn't Like to Be Alone

The Devon Rex is a strange breed of cat with curly hair. They have a soft short coat that's kind of similar to the Cornish Rex's. 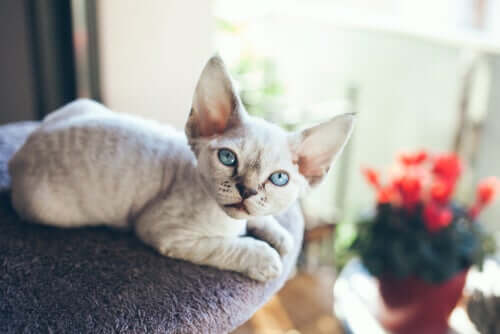 Short curly hair, large pixie ears, an elongated body, and luminous eyes are all physical characteristics of the Devon Rex. This is a cat who particularly loves human company. They’re docile, extroverted, noble and intelligent. If you choose them as pets they’ll surely follow you around the house, demanding your attention.

These cute-eared cats are always cold. Perhaps it’s this feature makes them seek human company. However, strictly speaking, most cats are highly sociable and increasingly, and continue to bring down the claim that they’re too aloof, distant and independent.

It’s not that the Devon Rex loves humans, in fact they mainly love comfort. This can include the warmth and safety of their owner’s lap, and even their shoulders. These cats are highly affectionate, active, and playful. They get along quite well with children and older people.

In addition, while they can adapt to enclosed spaces without problems, they truly hate being alone. So, if there’s no one home for long periods of time, then you should get a second cat to keep them company. Devon Rex isn’t the jealous kind, and will gladly accommodate the new member of the family.

The looks of the Devon Rex

Their ears are larger than most cats and widely separated. They have a broad base, rounded tips, and the fur in them that makes them look like a poorly-sheared lamb. In addition, the Devon Rex has the following features:

We’ll tell you many of the characteristics of the Devon Rex. A cat with big ears, curly hair and graceless aspect who loves human company.

Other characteristics of the Devon Rex

The males of this breed weigh between 8 and 12 pounds and the females between 3 and 5. Even though their walk seems somewhat clumsy, they are, in fact, quite agile animals, capable of performing all sorts of pirouettes and acrobatics. The life expectancy of a Devon Rex is between 9 and 15 years.

Note that the Devon Rex’s fur is soft, in addition to short. Also, it’s usually thin and less dense than in other breeds. And while this seems to be an advantage for allergic people, it isn’t necessarily an asset to the cat.

It’s precisely for this reason, that this type of cat is constantly looking for a source of heat, as their coat doesn’t keep them warm. So, ideally, their beds should be placed in the warm areas of a house, to ensure that they can be as comfortable as they are when in their owner’s lap.

The origin of this funny-looking cat goes back to the 1960s. It’s the result of a natural genetic mutation which is also responsible for their curly hair. The first specimens were discovered by chance in an abandoned mine in the county of Devon, England. In case you haven’t figured it out yet, this is where their name comes from.

Even though this breed looks very similar to the Cornish Rex, the mutating gene that gives wavy coats to both breeds is not the same one. So, if you were to breed them with each other, then you would end up with smooth coat specimens.

Furthermore, although their appearance denotes fragility, these animals are strong and healthy and don’t require a lot of extra care. Simply brush them during their shedding season to get rid of the dead hair. Also, make sure their ears don’t accumulate too much wax.

In addition, the cats of this breed should have regular baths because their fur accumulates too much grease. Also, make sure they have a proper diet and not overeat because the extra pounds are too much for their thin legs.

Hypoallergenic Cat Breeds
If you're allergic to pet hair but really want to adopt or buy a cat, you should definitely read this article to discover some hypoallergenic cat breeds. Read more »
Link copied!
Interesting Articles
Dogs
The Bergamasco Shepherd Dog Breed of the Italian Alps

Interesting Articles
Dogs
Do You Know What Dog Mushing Is?