Differences Between Cats And Dogs

Some of the most striking differences between cats and dogs are how independent cats are and how loyal dogs are. Both of these species differ in other aspects as well, such as their diets, hygiene and when they were domesticated. 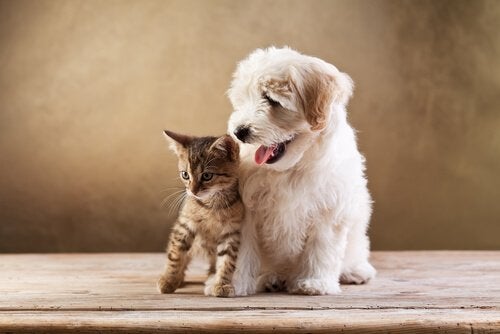 At first glance, you can see the physical differences between cats and dogs.  However, they also have differences regarding their emotions, behaviors, and diets. Continue reading this article if you want to find out more.

What are the differences between cats and dogs?

Maybe you want to adopt a pet but you don’t know which one to choose. Cats and Dogs are both beautiful animals, but they differ in some important aspects and not everyone is capable of having one as a pet. Below, is a list of some important between cats and dogs:

The first big difference between these two animals is that cats hunt alone just like other felines. However, dogs prefer to live in packs just like their ancestor, the wolf.

Cats have no problem spending hours alone at home, but dogs need to feel accompanied or they’ll become depressed or even sick. Also, dogs will do everything they can to please their owners because they see them as the leader of the pack. Cat’s, on the other hand, will play alone whenever they feel like it.

Even though cats and dogs both eat in their homes, they have differences in diet and how they eat. Felines hide and stalk their prey, and effectively hunt birds, rodents or insects. They only “tolerate” certain types of food, such as fish and paté.

Dogs, on the other hand, are omnivores and have a slightly broader diet. They can eat some fruits, vegetables, and red or white meats. Even in survival “mode” they can take on a vegetarian diet.

Another interesting fact is that dogs can go longer without eating than cats. Canines use their own body fat to produce energy.

So, it’s common for them to indulge their entire good dish within in minutes- especially the more gluttonous breeds like the Labrador Retrievers. However, cats will closely look at their plate throughout the day.

Cats and dogs are very different when it comes to their grooming. Dogs don’t do it themselves and, if they aren’t bathed, they will start smelling bad.

However, cats can spend all day grooming themselves and smelling bad is quite uncommon for them. If a cat does stink then it’s a sign that there’s something wrong with the animal and they should be checked by a vet immediately.

Cats are wilder and are usually more difficult to train. Therefore, people often say that they usually do what they want.

Dogs are the opposite. When they’re trained as a puppy, they learn how to be obedient in any situation, either at home, in the park or on the beach.

One of the first things a cat will do once they arrive at their new home is leave their sent everywhere. How do they do it? By rubbing themselves against objects, furniture, walls, and even people. Dogs will not mark a territory as their own unless there’s more than one in the home.

As for protection, dogs won’t hesitate to protect their owner, no matter how dangerous the situation is. The only time a cat will attack is when he thinks his territory is being invaded. They don’t care if the person invading their territory is someone in the family or a stranger.

Dogs and cats are completely different. No one can deny that. However, they are the best pets you can have at home.

Be sure to consider all of their specific needs and give them lots of love. In return, they’ll give you plenty of company. So, don’t be afraid to get both a cat and a dog! They’ll become best friends.