5 Recommendations for Dealing with Your Dog's Aggression

Dog's may show aggressive behavior when they feel ill or are in pain due to being scared or simply because they're defending their territory. From there, you can work on training them to correct their violent attitudes 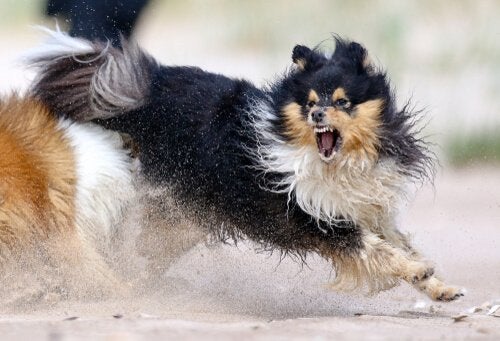 Dealing with your dog’s aggression can be a challenging, especially for people who have never seen their dog act this way before. The truth is that these cases can become very scary because there is a risk of serious injury while trying to calm the animal.

However, the reasons why dogs act this way can vary. So, dealing with a dog’s behavior may have more than one solution, but the difficulty all depends on each d0g. First, let’s talk about aggression.

What is aggression in dogs?

Aggression is an instinctive reaction of an animal to certain situations or stimuli. These stimuli aren’t always due to imminent danger or an attack by another animal. Normally, they are a reaction to panic or even pain.

So, dogs aren’t aggressive because they intentionally want to cause harm, but rather because they’re responding to an animal instinct. When they’re injured, a violent reaction is normal because they don’t understand why they feeling pain or ill.

However, aggression isn’t always the product of pain. Sometimes, it’s a behavioral problem that’s the result of improper training. It’s important to know the signs of aggression, and why they’re acting this way in order to be able to treat it.

Causes of aggression in dogs

A dog can be aggressive for different reasons. Many of these reactions are a response to their primary instincts from when they were wild animals. We’ve already talked a bit about how aggression is a reaction to pain, but it can also be a reaction to a disease.

Dermatitis and oral diseases can be the main triggers for aggression in dogs. This is due to the intense irritation that the animal experiences in their body, or the swelling in their mouth.

The animal doesn’t understand what is happening to their body, so they react in this manner out of fear and pain. Also, an animal may react this way to protect their family, which is common for mothers that just had their first litter. .

A maternal instinct is a great force that moves the animal world, and dogs aren’t an exception to this rule. A mother is capable of doing anything, including sacrificing her own life, for the well-being of her puppies. Therefore, aggression is a defense mechanism.

Also, dogs react violently when they’re interrupted while eating. They do this because they’re defending their food so that it doesn’t get stolen by any scavengers. This is why understanding the reason behind your dog’s aggression is vital to dealing with them.

How do you handle your dog’s aggression?

There are several ways you can handle your dog’s aggression, and a large part of the effort is patience and self-confidence. Before using any of these methods that we’ll discuss below, it’s important to talk to your vet in order to rule out any diseases that may be causing your dog’s aggression.